A brash and headstrong dwarf. He's proud of his clan's silver eyes and brags about them to everyone.

Brazen, messy and always raring to fight, Zaid appears to move almost entirely on impulse, preferring to focus more on brawn over brains. Rugged as he is, his few ideas aren't all that fleshed-out—even his dreams of exploring the world are, in themselves, quite shallow, with little thought or purpose behind them besides an instinctive or childlike curiosity. However, while he might act boisterous and reckless, he proves to be very dependable when the situation calls for it, according to the other residents of the settlement, and is apparently quite generous when it comes to them.

Zaid takes great pride in his own bloodline traits and physiques, such as his silver eyes and his muscles. He is also very loud and clear about what he likes, namely udon. He's a bit of a child when knowing of his special day, such as by using the term "gimme, gimme!" unlike anybody else. In his speech, he tends to talk in a chain. He is also highly competitive.

Zaid doesn't like insects, claiming he'd rather fight a Hercules Beetle than face a "speedy black bug" that he saw. Zaid hates sweets, perhaps because he's very sensitive to sweet things, like Marian's over-sensitivity to the smell of tomatoes. Zaid calls his sword "Mr. Slice", believing that forging a relationship with one's own weapon is key to getting stronger, and is always sharpening and repairing it. He crafts his own weapons—after all, as a dwarf, crafting is his specialty.

He is a dwarf, living in the Univir settlement in Sol Terrano Desert. Zaid wears green clothing and has shoulder-length blond hair that he keeps pulled back into a ponytail. He has a scar on his left cheek that goes down to his jawline. His eyes are silver, the same as the rest of his tribe, and he's very proud of them, occasionally bragging about them to Micah. He also brags about his 'muscles' despite the fact that he seems to have very little.

When Micah asks him why he doesn't reside alongside humans as he is a dwarf like Gaius, Zaid reveals that before coming to the Univir settlement, he used to live in a town that was inhabited by his dwarf clan. However, he claims that humans destroyed this town, and he developed a strong hatred for humans as a result. This also shows a relation where he and Doug (from RF4) were part of the same clan before this attack happened and Zaid was the only survivor to not be manipulated.

As a member of the settlement, Zaid is on friendly terms with Ondorus and Kuruna, who are somewhat guardian figures to him. Their stern attitudes towards him suggest that they view Zaid as akin to a rowdy teenage child. Zaid highly respects the pair and listens to them as best he can. He fears getting into trouble with them (though that doesn’t stop him from acting brashly) but wants to please them whenever the opportunity arises. He is, to some degree, more familiar with Ondorus, with whom he talks slightly more freely. Since Kuruna is the elder, he maintains a relatively polite distance from her, though only marginally.

He apparently develops a crush on one of the girls at the Unity Festival, though it is unclear who she is or whether this changes every single year. Either way, he never manages to talk to her because he's too busy trying to figure out what to say beforehand.

During festivals, he can be found with Ondorus chatting near the Sharance Tree, and after the Unity Festival, he can be seen visiting the blacksmith's fairly often. 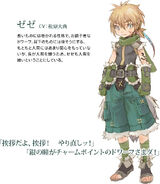 Zaid in the Japanese version