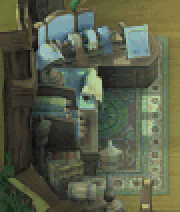 The workshop is one of the crafting areas, and it is used in making shields, headwear, footwear, and accessories. To be able to create accessories, the second floor of the Sharance Tree must be unlocked by clearing the Privera Forest dungeon and traveling to the Univir Settlement. Once the second floor grows in, Gaius or Raven will offer to build a workshop for 3000G and 50 wood.

To obtain recipes in-game, one must eat Recipe Bread. These can be bought from Blaise for 300G each. They can also be bought as one of the random items from Yue at the upper floor of the inn when she's there. Sometimes, a male traveller in a trench coat sells them as well, and he has a limitless supply of recipe bread to sell, as long as his costs are paid for each loaf. However, his prices are higher than Blaise's, and he appears very late in the game.

These items cannot be upgraded.