The youngest of the three sisters at the inn. She's a little shy, but feels passionate about her job as a nurse.

Very shy and with a soft voice. Violet spends her time tending to many types of flowers at the Church and very dedicated in her job at the Clinic. She has a open heart and cares deeply of the residents on the Island, always making sure everyone is in good health, even if it means another Grass Juice for Father Gerard.

Violet likes her name, since it's the same name as a flower. She thinks of the flower as not flashy, but beautiful; presumably traits Violet want to have/sees herself having.

Violet and her sisters have dark yellow/orange eyes.

Violet is the youngest of the three sisters at the inn. She's a shy girl who loves gardening. Violet works at the clinic that is part of the church. Violet, along with her sisters Lily and Odette, is a Dragon Priestess who is capable of singing Spirit Songs. Of the three, she is the least vocal, only singing during story Quests. She is revealed as the Water Dragon Priestess.

Violet will ask you if you have time to chat. If you say that you do the screen will fade to black and you will reappear at the Church Plaza.

Violet is curious about Aden and Sonja sharing the same body and asks Aden what it's like. He describes it as being like "having a song stuck in your head. A really noisy, opinionated song." which, of course, gets Sonja upset. Violet then randomly says "You two get along so well..." Which makes Aden think that she must be kidding or sick. He then says that since they spend so much time together of course they're going to fight. She then agrees that it must be tough.

Violet will say that there's something that she wants to talk to Sonja about. If you agree to go, the screen will fade to black and you will reappear above the Blacksmith's by the bank (where all the flowers are, or by the church bell's flowers).

Violet will show Sonja the flowers that she grew. Sonja thinks they're beautiful. But she humbly replies that, "Anyone can grow beautiful flowers as long as they grow them with love." After complimenting the flowers again, Sonja will then ask Violet what she wanted to talk about. She then says that she only wanted to show her the flowers.

Violet will ask if she can talk to Aden for a minute. If the player comply the screen will fade to black and they will reappear at the clinic.

She will be looking for something in the cupboard. She will pull out a recovery potion and says that it's for Aden because he 'seemed tired lately'. He'll drink it, and afterwards he'll say that he feels energized and that it tasted really good, which makes Violet happily blush. He then asks if she can make it again for him sometime, and she says that she'd be glad to. When she starts to walk away she will start to ask Aden something but seems too embarrassed to say it, which confuses Aden. She then blushes and says never mind. He still wants to know what's wrong but Sonja will say 'Hmph' which makes Aden want to know what's wrong with her, and asks if she slept poorly or something. She then angrily says, "You know you're a real idiot sometimes Aden." Which again makes him say 'What's with you?"

Develops a crush on Aden on their first meeting, as evidenced both by her being shy when around him and the fact her Friend/Love meter starts significantly higher than most other characters at the beginning of the game. As she and Aden become closer, she acts less shy and becomes fairly comfortable around him, stuttering less and being more open to voicing her opinions and thoughts.

She feels somewhat intimidated by Sonja, though this isn't very evident since Violet tends to hide her feelings. At friendship/love level 6, Violet gives Aden medicine to purposely make him pass out as to confront Sonja individually Violet admits to Sonja that she loves Aden (oftentimes the first character to do so) and hopes that it won't get between her and Sonja. Violet admits she thought that Sonja has hated her for some time due to the foul mood Sonja was in during Aden and Violet's date. Sonja apologies, saying that she was mad at Aden's obliviousness to Violet's feelings, and denies having romantic feelings for him, nor thought of Violet as anything less than a friend. From that point onward, they appear to be good friends.

During the very early mornings Violet is seen watering the plants around the Church, otherwise during regular shop hours she is seen inside the Church in the Clinic office where she sells potions, herbs, grass and cures the character of a cold. At night she can also be found at the Three Sisters Inn. 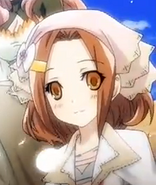 Violet in the opening of Tides of Destiny 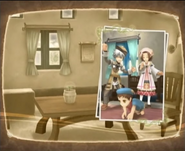