A legendary wind dragon who happens to be one of the four Native Dragons. Being the protector of Selphia has created a natural distance between her and her citizens, so she often experiences feelings of loneliness.

Ventuswill is one of the Elder Dragons of Rune Factory 4. As one of the four Elder Dragons of Norad, she is the protector of Selphia, and cannot leave the town. She stands guard to protect the townspeople and to ensure that the runes in the land don't dry out. Her safety is as much a priority for the people of Norad as their safety is for her. She has the duty of producing and returning runes to the world through her body.

Once the player has completed the third act of the story and obtained a ranking of 2500, she can be recruited to go into dungeons with him/her. This is an Order which costs 30,000 Prince/Princess Points.

Despite likening herself to a god, Ventuswill has the least imposing or knowledgeable image of the four Native Dragons.

Ventuswill now hides the softer side of her personality and acts formal and commanding before others, because she doesn't want someone to risk themselves for her. The only exception she makes is for the protagonist, in front of whom she had slipped up due to her surprise at them landing on her in the beginning of the story.

Ventuswill is a green dragon with colorful wings ranging from green, cyan, orange, red, dark blue, and red. she has two pairss of horns on her head: a large pair that sweep upwards and back towards her neck and a second smaller pair on the side of her head that sweep outwards. She also has a short mane of either yellow feathers or blonde hair on the top of her head, just above her eyes.

Following Ventuswill's arrival at the Floating Empire, she confronts Ethelberd and assists the protagonist in dispatching the mad Emperor. After defeating Ethelberd once more, he clings to the Rune Sphere's power once more and uses the power of Etherlink, leaving the protagonist helpless to watch as he fuses himself with Ventuswill's dragon body.

After arriving back at Selphia, the townspeople are overjoyed by Ventuswill and the protagonist's return, celebrating their arrival with a party and announcing how they worried for the protagonist. Following the celebrations, the protagonist approaches Ventuswill once more to talk about the future, with Ventuswill providing an ominous tone. She tells the protagonist that her time was short-lived as her body had already gone back to the Forest of Beginnings. Through force of will, her spirit brought the protagonist back to Selphia because of her wish to see everyone one last time. After giving her thanks and gratitude and saying her goodbyes, Ventuswill dissipates into a floating sphere, bound for the Forest of Beginnings. The protagonist ruminates over her friendships with Ventuswill and that of the townspeople, saying that they mourned for a long period of time before things began to settle back into normalcy. However, the impact of Ventuswill's disappearance left a void in Selphia, the town where there was once a self-sacrificing dragon who spoke a human language and befriended its townspeople.

After completing the second arc, any time after that (since this is random it may take a bit) a town event called "Memories" will eventually take place (the event can be manipulated into occurring if you bring both Dylas and Amber into your party before you sleep, and if they leave in the morning then you know that the event has been triggered), and will begin the third arc. In this event, you'll eavesdrop on the various guardians discussing a way to bring Venti back among themselves, or with Barrett or Raven. When the town event is complete, the player can climb Leon Karnak, refight its bosses, and unlock Rune Prana at its base. Rune Prana is a seven-part dungeon with returning bosses from previous Rune Factory games. Defeating each boss allows the player to remember their past as an Earthmate and their job to bring the Rune Spheres to Selphia for Ventuswill, so that no more people would have to sacrifice themselves to become Guardians. Defeating the final boss Ragnarok (a version of Ethelberd) allows the player to bring Ventuswill back to life for good.

Ventuswill does not have any unique requests.

In the past, Ventuswill used to have a dragon priest, and a more casual relationship with the people around her, but she's long ago abandoned such things. Ventuswill actually prefers being called Venti, but the only person who knows that is Lest/Frey, who caught her with her guard down, and those who knew her back before she felt the need to put her guard up.

Ventuswill easily mistakes the protagonist (regardless of gender) for a member of royalty named Arthur, despite having a close relationship with the royal family, and she will hastily relocate the blame for when she turns out to be wrong. This is the beginning of a long relationship between herself and the protagonist, in which the two exchange friendly bickering. If the protagonist is Lest, however, she will occasionally wonder if he would consider a relationship with her, only to immediately shoot the idea down herself. During her Another Episode in Rune Factory 4 Special, she will actually marry Lest and have two human-dragon hybrid children.

More than anything else, Venti doesn't want to be alone. She's lost numerous friends in the past and is no longer comfortable opening to others, afraid she might lose them as well.

When we fall on Venti 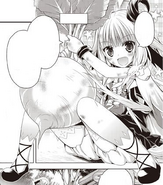 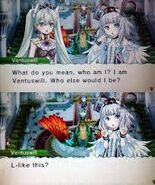