Trampoli is a much smaller place and can barely be called a village. Lots of people come here from Kardia. It's not immediately close to Kardia, but at a reasonable travel distance.[1]

The farm owned by Raguna. The homestead is where Raguna lives and farms. His Monster Barn is also located there.

Beach Road (海岸へ続く道, Kaigan no Tsuzuku Michi) contains Mist's house. Rosetta lives there briefly, and Anette moves in as her roommate as the story progresses. The Green Ruins can be found there. It leads to the Beach.

The Beach (海岸, Kaigan) is used primarily in the Summer. The bachelorettes and others often are down there with their swimsuits.

The Church District is the home to Kanno, Stella, Lara, Cinnamon, Selphy, and Candy. Kanno, Cinnamon, and Candy reside in the Clock Tower, Lara and Stella in the Church, and Selphy in the Rune Archives.

The clock tower was built sometime before Stella came to the village, but since that time hasn't worked even though lots of people have come to look at it.

If Raguna waters the sparkling area, a plant will grow to Whale Island. He will immediately climb up it and, once there, be greeted by the awareness of the whale. It claims that it was a mere cluster of rocks when it was gifted with awareness. It was gifted this ability by the Runes (a collection of spirits) and began swimming in the skies. Though Runes are formed by the earth, there are times when Runes affect the earth instead. It says that though it's awareness and body are sustained by Runes,it feels as though the Rune within it grows weak. If the Rune were to ever disappear, its awareness would fade and its journey through the sky would end. This would cause grave danger to the villagers. It shows him a stone tablet and says that it existed there before it became aware. She tells him that it might be helpful and also warns of the monsters. She says they must be returned to the First Forest with Returnen.

The Business District is where many of the shops are. Melody runs the Laga Springs Bathhouse, and Nolan is often there as well. Ganesha runs the Blacksmith and her son Marco lives there, and Danny runs his General Store until Rosetta's General Store bankrupts Danny's; he then will work for Rosetta. Turner runs the Sunshine Inn with his daughter Eunice. His wife Rita works at the Snowstyle Tavern, which is connected to the Inn. Uzuki also resides at the Inn.

The Town Square is where the residents of Trampoli go to meet. Lute does his business there on holidays, and Iris Noire sings beneath the large boulder in the center of it until you unlock her.

The South District contains the farms of Kross and Erik. During the summer (and the rest of the game if you complete the Francoise event), Bianca and her maid Tabatha live in the mansion. Brodik also lives here.

The general store run by Danny.

Lake Poli is accessible through Mountain's road, who also contain the entrance for the Lava Ruins, and a divergent path for the star's observatory center.

Lake Poli is where Raguna takes eligible females for dates. Lute usually spends some time here as well, and on occasion Stella, but it often deserted. 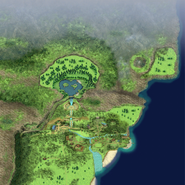 Retrieved from "https://therunefactory.fandom.com/wiki/Trampoli?oldid=68833"
Community content is available under CC-BY-SA unless otherwise noted.