Very sweet and assertive, she goes out of her way to help those in need. Guiding Aden on his journey, they are stuck together as her soul is trapped within him, but she doesn't let it stop her from being herself and forming wonderful friendships.

Sonja has light skin with neck-length pink hair and green eyes. She wears a suit consisting of pink, white, brown and black colors.

The female protagonist of Rune Factory: Tides of Destiny. At the beginning of the game, she loses her body and is trapped in Aden's instead. She has also been friends with Aden ever since childhood.

She is later revealed to be the Wind Dragon Priestess, the missing 4th Dragon Priestess of the legend. The reason she's in Aden's body is because she supposedly died 200 years ago (which was actually the Masked Man stealing her Body), and needed a host in order to be placed in the "present" time, hence why she was forcefully merged with Aden. She was then sent to Fenith Island through an interrupted (and thus distorted) spell that Pandora cast.

It's assumed she likes cooking, as constantly comments about food and cooking in general. This is best example when around Odette (who also enjoys cooking) and most scenes involving the kitchen. Also, it is implied that she's fairly adept cook herself, as she has cooked Aden's meals for him and still does that.

There are no Requests in Rune Factory: Tides of Destiny.

While within Aden's body, she is forced by Aden to go on a date with Bismark to help get over his fear of girls. Though she had no choice in the matter, she appeared willing to do it.

While bound to Aden, Sonja is much more capable of understanding other girls affections toward Aden while he remains clueless. This is most visible during interactions with Violet and Odette, both whom ask him out on a date (informally or formally) during the course of the Friend/Love cut-scenes. Usually, Sonja consoles the girls, letting them realize it's Aden's fault, not theirs, that he doesn't comprehend their moves.

She also harbors strong feelings for Aden, which (most of the time) appears to only be sisterly in nature. Some of her reactions however, hint at there possibly being more. In Violet's friend/love level 6 cutscene, Sonja denies having any romantic interest in Aden, and acts frustrated when Aden doesn't comprehend Violet's efforts to woo him. It should be noted that a romantic relationship can be made between Aden and Sonja through the player's actions. Aden can still marry Sonja (and Sonja can still marry Aden), and thus, goes directly against her statement to Violet.

When playing as Aden, she can be found working at the Inn or shopping at the Gemini Store. During the Holidays, she stands just outside Aden's home.

Sonja in the opening of Tides of Destiny 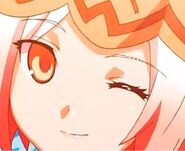 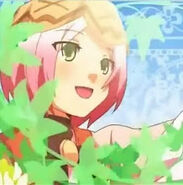 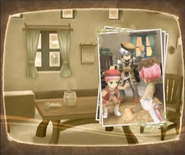