Sherman's spoiled, haughty daughter. Takes after his habit of speaking in opposites.

Sofia is a wealthy, strange girl who is constantly bored and seeking attention. Like many of the De Saint-Coquille family members, she has no awareness of the value of money. Despite how vainly and demanding she might act, she is actually a sincere young woman who adores her family and friends, doing whatever she can to help them and engaging earnestly in whatever interests they may have.

She has taken up her father's habit of speaking in opposites, which makes it difficult for others to understand her and sometimes lands her in confusing situations. It is impossible to tell whether speaking in opposites is now purely second nature to her or she still has to think before talking. It is noted, however, that she speaks in opposites even more when she is highly stressed, and that actively restraining herself from speaking in opposites also stresses her out.

Sofia likes useless things such as Cans and Scrap Metal—a preference which likely originated from a certain incident in her childhood with her older sister.

Sofia has long, straight, purple hair adorned with a yellow ribbon that has a thick, light blue outline. Her bangs are parted to the right, held in place by a light blue hair clip. She has matching purple eyes and pale skin. She wears an elaborate dress with frills and ribbons, and on her feet are a comfy pair of boots.

Contrary to what her opposite-way of communication might suggest, she is actually hiding her honesty. As a matter of fact, Sofia hadn't always spoken in opposites—it started long ago when Sofia got a gift made of garbage from her sister. She hated it, which made Evelyn very upset. After that incident, she wished to tell the truth by lying, and now she makes it a habit like her father, who also speaks in opposites. Sofia's speech is coloured red whenever she speaks in opposites.

In Raven's request 'Thank You', when they give a Failed Dish as an apology gift for Sofia, she mentions that Raven actually thinks that the light was what took her friend away. She also explains that the light emerges from a series of disturbances in the rune energies from a monster and a human. Micah is a bit in shock since he's a half-human and half-monster. Sofia elaborates "But I haven't found where it causes a person to disappear. Just monster pets." Raven still says that she saw her friend (a person) disappear with her own eyes. Sofia then says, "Was that really a human?". Raven is shocked by the inference made by Sofia. Raven and Micah are both half-human and half-monster, and the wooly nearing the light had rune entity within it. The effect of boundary-breaking created a portal-form of energy from such disturbance in the atmosphere. This is to ensure that this 'boundary' limits certain disturbances between those who are different.

Bring something to eat.

There's something I want you to bring me.

Sofia asks Micah to get her a weed. After he gives it to her, she thanks him and returns to her bedroom. Evelyn tells him that Sofia tests whether people can understand her. Micah says that he doesn't mind because he likes her. Evelyn is happy to hear this and says Sofia only tests people that she likes.

Unlock: ❤ 4
Location: Bulletin Board
Objective: Sofia is being harassed by a stranger who wants to make her his wife, mistakenly believing they are mutually in love, as he is unable to understand her opposite-speak. Karina steps in and proposes a competition: between Micah and the stranger, whoever manages to understand what Sofia wants will be the victor, and the other has to back down. Sofia demands in opposite speak that they bring her an

Apple that can be found in Privera Forest.
Reward: Amethyst Ring

Please come. It's an emergency.

Unlock: ❤ 5
Location: Bulletin Board
Objective: Sofia accidentally ate her father's meal and needs the chef to prepare a new one. However, she doesn't have the ingredients, and so she enlists Micah's help in obtaining them. Catch 3 birds in Sharance for Sofia by 6PM. Micah can catch them while walking near one.
Reward: Medium Yogurt x3 and Medium Cheese x3

I want you to look into something.

Unlock: ❤ 6 | Completed Evelyn's request (Can you help?)
Location: Bulletin Board
Objective: Sofia recently looked into Evelyn's room and found her older sister crying while she was working. Sofia wants to investigate why together with Micah. Talk to Karina to deduce that Gaius must be the cause and find him at Sol Terrano: The Fossil.
Reward: Monkey Toy and Platinum x3

I need some help.

Unlock: ❤ 7 | Been on a date together
Location: Mailbox
Objective: Sofia wants to promote Evelyn's fashion line among the girls in town and asks Micah to help, as no one believes her when she apparently praises them. Speak to all the Bachelorettes in town.
Reward: Sapphire x2, Aquamarine x2, Diamond

Request 8: It's not much

Unlock: ❤ 8
Location: Mailbox
Objective: Micah walks into the Mansion to find Sofia and her father having a huge argument, and she runs away in tears. With the help of Raven and the townspeople, find Sofia and Gaius's location.

Unlock: ❤ 9
Location: Mailbox
Objective: Go to the Mansion. With Sofia, visit Vale River: Icy Rosebush. When she runs away, return to the Mansion to have an honest talk with one another.
Reward: None, or a step forward in Micah and Sofia's relationship.

Sofia loves her older sister, Evelyn, and her father, Sherman. She highly values her familial relationships and often talks about small events that happened at their mansion. While the emergence of Sofia's opposite speech deeply concerns Evelyn, and Evelyn's unusual fashion sense horrifies Sofia, they have a good, solid relationship nonetheless. Thanks to Sherman, Sofia has normalized a lot of outrageous behaviour, but they get along splendidly. Both sisters can get into dramatic disagreements with their father due to conflicting interests or values (or mishaps with food), but they’re all very close, and they obviously cherish each other.

Raven and Karina are Sofia’s best friends in the town, always hanging out together during festivals. They often mention her in conversations and vice-versa. The trio accept each other’s individual eccentricities, seeing them not as flaws, but simply as part of who they are, and, on the whole, respect their personal boundaries. They appear to have developed some fluency in understanding Sofia's opposite language, particularly since her actual feelings show through her facial expressions, though there are rare moments it becomes too confusing for either of them to decipher. Sofia spends a lot of time visiting their stores to chat with them and sometimes offers them (surprisingly) sound advice on customer service, which neither of them ever follows. Out of the three, Sofia is, in her own paradoxical way, the most honest in expressing worry and love for them, and she goes out of her way to help them however she can.

Sofia usually casts her Shocking Wail(Shock Wave) whenever an enemy is out of her range. She does not approach them by running, but rather, she is cautious enough to deal a quick, effective Lunging Talk, combined with the Sweep Talk for a very versatile combo. She has a great awareness and oblivious enough for retaliating enemies' attacks.

Sofia's melee combat tactics is pretty random, since she always performs them in an all-out attacks. But, she will always cast Shocking Shout whenever an enemy is not within her combat range.

Sofia will always cast the corresponding Medi-spells for a quick restoration. She will cast it when either she or Micah is inflicted with Poison, Paralysis or Seal. She is aware enough to be idle for a while and casts it for a quick status dispelling.

Sofia has no Special Skills.

On holiday mornings, when there are no festivals, she is normally chatting with Raven and Karina in her room until approximately 10AM. From time to time, she can be found paying either of them a friendly visit at the blacksmith's or general store respectively. 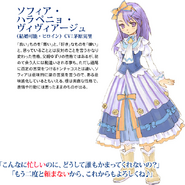 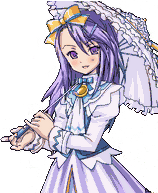 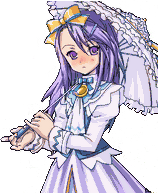 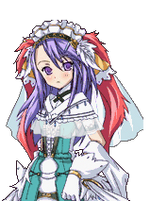 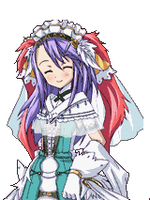