Sierra is cheerful and loves to have fun, often wanting to play more than she does work. Although Bismark constantly worries, Sierra seems to have her head in the clouds and has a very positive outlook on everything.

Sierra has tan skin and short, spiky red hair. She has yellow eyes like Bismark.

At a later point in the game Sierra says, "I feel an artistic something inside me" before blurting out "Rainbow!", which is a reference to Daria from RF3.

Each season, she will have a request on the bulletin board to buy a special weapon on sale for one season only. She compliments the player on accessories that they wear, and takes pride in being able to fall asleep as soon as her head hits the pillow.

A Ghost in the Ocean?

Sierra asks Aden to investigate island. After doing so, she rewards him with Sardine Sashimi (5).

Sierra offers to sell a spear. She says that it's made from a branch of the tree said to be the longest-living tree in the world. She sells Bunbunir to Aden for 1000G.

This is a detailed list of Sierra's requests given in Rune Factory: Tides of Destiny.

Description: Sierra wants somebody to deliver a message to Odette.

How to complete: Talk to Sierra to start the request. She'll ask you to tell Odette that she wants a cake. Find Odette, who will say that she's too busy to bake a cake at the moment. Return back to Sierra, who wants you to bake her a cake instead! Bake her a cook using the recipe she gave you with with Milk, Flour, Butter, a Strawberry, and an Egg. Alternatively, you can buy the cake at the Three Sisters Inn. Give the cake to Sierra to complete the request.

Sierra is the fraternal twin of Bismark, and practically his polar opposite.

Sierra and Quinn have a lot in common. Their brothers prefer to stay quiet and solitary, while they're fun-loving and excited.

Sierra helps her brother work at the Gemini General Store. She often abandons her duties which leaves her brother feeling frustrated that she can't grasp responsibility. When Sierra isn't working, she loves to spend time with Electra in the mansion. She can also be seen at the beach during the summer time and visits the Inn during the evening. 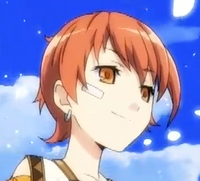 Sierra in the opening of Tides of Destiny 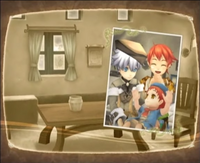