An arrogant glutton who's amassed a vast fortune. Speaks in opposites.

Sherman is wealthy, pompous man who loves eating. He has the habit of speaking in opposites, which he passed on to his daughter, Sofia. He loves his two daughters, and he believes he would be content in life so long as he can live by their sides...that, and if he has some food.

He wears his green hair in a bun, topped with a fancy hat. He has blue eyes, with a monocle over his left, and dons a flamboyant red outfit.

Sherman and Sofia speak in opposites, indicated by when their speech is in red.

He rivals Collette as one of the biggest eaters in town.

Wood. He will provide a Rusty Axe to chop Wood.
Reward: Rusty Axe and 3000G.

Sherman and his eldest daughter, Evelyn, do not always see eye to eye because she is constantly trying to get him to limit his food consumption, though he seems to get along splendidly with his younger daughter, Sofia. He often gets into fights with his daughters whenever they accidentally eat or ruin his meals. Still, he loves them dearly and sings high praises of them, even if some aspects of their personalities utterly baffle him.

He is a regular customer at Blaise's diner and shares a good business relationship with him. Sherman was the one who had brought Blaise to town after tasting his food sometime in the past. Had he not succeeded in persuading Blaise to open shop in Sharance, Sherman would have long since left the town for another place.

He lives with his daughters at De-Sainte Coquille Manor. He can often be found eating at Blaise's Diner. 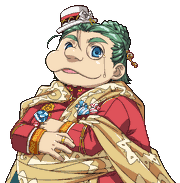 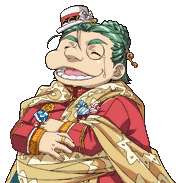 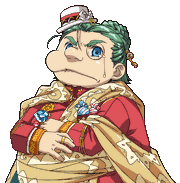