A kind and generous girl who raises flowers with love and care.

Shara is a very warm, bright, unassuming girl whose favourite hobby is gardening. In particular, she enjoys growing flowers, talking to them and caring for them in the same way she would a friend. Generally, she shows kindness towards everyone she meets, including Woolies and other harmless monsters.

Shara is the most sociable person in the entire village: she remembers everyone's birthdays and is always talking about their likes and dislikes. In turn, all of the villagers are equally fond of her.

Shara has straight, shoulder-length orange hair and blue eyes. Her skin is light.

Shara is Monica's older sister and Wells' eldest granddaughter. She discovered Micah in his golden wooly form when he was unconscious after he fell out of the sky, outside her house, and carried him up to her room so she could nurse him back to health. However, in the interim, he awakened in his human form and wandered around Sharance with no memory of who he is or why he came to Sharance.

Shara meets Micah again outside the Sharance Tree, in his human form this time, unaware that they're actually the same person. After discovering that he's an amnesiac, she invites him to live in the tree until he recovers his memories. Giving him a waterpot, a hoe, and some flower seeds, she encourages him to use the fields beneath the tree to grow crops with a cheerful expression on her face.

She has low Str, moderate Vit, and high INT.

Welcome to town! Come talk to me for your first request.

Unlock: During Tutorial
Location: Bulletin Board
Objective: Shara wants Micah to introduce himself to the townspeople. Enter all the other houses and talk with everyone. Report back to Shara, and she will ask Micah to ship something—anything—before her request is fulfilled.
Reward:

Request 2: Come with me

I want to show you something!

Request 3: I need your help…

I want to meet a wooly.

Unlock: ❤ 3 | Cleared Privera Forest
Location: Bulletin Board
Objective: Shara is worried about the golden wooly she took care of on the stormy night of Micah's arrival in town, and she wants to find it. Talk to Shara while in wooly form. Transform back into a human, and talk to her again.
Reward:

My waterpot broke. Can you help…?

Unlock: ❤ 4
Location: Bulletin Board
Objective: Help Shara get a new waterpot, as hers is broken. Micah will be given three options:
Reward: If the first option is chosen, the rewards are as follows:

It's about Monica. Do you think you could help?

Unlock: ❤ 5
Location: Bulletin Board
Objective: Shara is worried about Monica's attitude towards strangers and wants help fixing it. Talk with Shara.
Reward: None

Request 6: Thank you, Your Highness.

May I request an audience with the Rose Prince?

I want to tell you something...

Request 8: Come with me

A small wooly has been coming to play. Would you like to join us?

Unlock: ❤ 8
Location: Mailbox
Objective: Go to Privera: Flower Field, where Shara will be found tending to a wooly, and Micah will protect her from another wooly that is about to attack her from behind. After the scene, Shara will bring the wooly to her house and care for it.
Reward: Shield Ring
Note: After the request, the wooly will stay in her room.

It's about the wooly!

Unlock: ❤ 9
Location: Mailbox
Objective: Go to Shara's room. Wells wants Shara to release the wooly out of consideration for its parents, but Shara doesn't want to. Afterwards, Micah has to find the wooly's parent. Go to Privera: Flower Field, and transform into a wooly to talk to it. Go back to Shara's room to tell Shara that the wooly's parent is looking for it, so she needs to return the wooly to the wild. Upset that Micah agrees with Wells, she runs back to the flower field. Follow her.
Reward:

Shara occasionally argues with her grandfather, Wells, the mayor of the town, over her habit of taking in wounded monsters. She also reprimands him for spoiling the younger granddaughter and expresses concern for his old age. Both of them share a love for flowers.

Shara and her little sister, Monica, both share a close bond, often going around festivals together. Shara coaxes her into trying things she dislikes by promising to do something more fun together later, but she still makes sure to be stern whenever necessary, as she doesn't want to overindulge her. She tends to show a more maternal side around her.

Later in the game, Shara befriends Kuruna. Upon discovering that they both had similar upbringings, they foster a friendly relationship, and Kuruna begins to stroll around town with her and her sister during festivals. Shara finds Kuruna's shyness and awkwardness cute.

Normal Attack: Sharance Rain - Shara performs her attacks by rushing towards the enemy, sprinkling them up to 3 hits. She uses this attack concurrently with Deluge Pot.

Shara will cast restorative spells such as Medipoison or Mediparalyze and Mediseal instantly in times of an enemy's prowl. She will cast it sooner if she's affected as well.

Shara has no Special Skills.

Shara normally wakes up at 6:22AM. She can be found in her house with Monica and Wells. 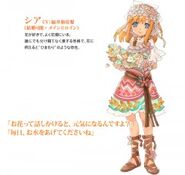