A sleepy apprentice carpenter who's always promising that he'll get around to doing his job... eventually. His lack of work ethic means he doesn't get along with the diligent Martin. Often lectured by those older than him and treated as a peer by those younger than him. Although he's constantly dozing off during the day, at night a cooler, more mysterious side of him emerges. He owes a great debt to his mentor, Palmo.

"I'll get straight to it tomorrow. Today, I rest."
―Ryker

Until you are formally introduced to him he is known as "Sleepy Young Man".

A sleepy apprentice carpenter who owes a great debt to his mentor. His hands are as quick as his wits, but his lack of work ethic means he doesn't get along with the diligent Martin. Often lectured by those older than him and treated as a peer by those younger than him. Although he's constantly dozing off during the day, at night a cooler, more mysterious side of him emerges.

Ryker has pale skin, white hair and gray eyes, giving him an ethereal, fairy-like appearance. He dresses in a loose-fitting, powder blue shirt with slits in the sleeves and silver embellishments including chains, ribbons, and buttons paired with charcoal black pants and blue-tipped toeless lace-up shoes. He also dons a pale gray hood and blue emperor butterfly accessories.

Ryker doesn't see eye-to-eye with Martin, the local blacksmith, as the two often clash with each other.

When the main character enters the Grand Tree Plaza, they encounter Ryker sitting on the ground, fast asleep.

Simone is also present in the plaza, alongside Julian and Hina. She scolds Ryker for sleeping rather than being at work, mentioning his plans to become Palmo's right hand man one day, and theorizes that his bad behavior is influencing the children. Julian and Hina confirm by listing all of the things he has "taught them", such as picking locks and how to nap without getting caught. Not wanting to be lectured by her, Ryker runs off, the kids close behind.

The next day after 7pm, Ryker can be found at Ripple Beach on the ground, fast asleep again. Yuki encourages Ryker to get up, concerned he'll catch a cold. Ryker wakes up and begins sneezing, and Yuki tells him to head to Murakumo's Inn for a bath and to be careful around Palmo to not get him sick too. Ryker shrugs off the encounter and leaves, while Yuki still expresses concern for Ryker to the protagonist.

After another day, Ryker is sitting outside the abandoned house located in the South end of town after 7am. The protagonist approaches Ryker and they begin discussing their differences in work ethic. Ryker reveals that he's annoyed because since the protagonist arrived, everyone in town nags him to be more like them. He calls the protagonist a goodie two-shoes and the protagonist, annoyed, sits beside Ryker to prove they can slack off too. Ryker seems happily surprised.

The next day, after 8am, the protagonist approaches Studio Palmo and spots Simone and Yuki standing outside the window, chatting about whether or not Ryker is sick. They reveal that Ryker has been acting strange and has been working hard all of a sudden. Ryker exits, annoyed, and tells them he can hear them talking about him, and asks them to leave. Simone and Yuki express their concern once again before leaving. The protagonist asks Ryker about this new behaviour and Ryker reveals that he wanted to try emulating the protagonist's work ethic to understand them better, but still finds himself at a loss. He concludes that the strait-laced life isn't for him and is impressed the protagonist manages it. The event concludes.

This scene is triggered at the Bridge of Hope any time after 7am. The "Chronic Slacker" event must be completed and a couple days must have passed after.

Ryker is deep in thought and as the protagonist approaches, he asks for their advice in getting a good gift for someone. It turns out the gift is for Palmo, who took Ryker in after Ryker's family and him separated. He talks about how he owes Palmo a lot. The protagonist suggests that instead of making something, Ryker can do something that makes Palmo happy. Ryker recalls that when he behaved like a "goodie two-shoes" (in the previous romance event), Palmo was so happy he almost cried and resolves that doing so again would be a good appreciation gift for Palmo. He thanks the protagonist before leaving.

Ryker can accompany the protagonist in battle. 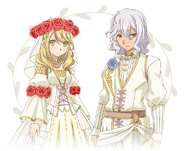 Ryker appearing on the cover of July 2021's Nintendo Dream