Rune Factory 3: A Fantasy Harvest Moon (ルーンファクトリー3, Run Fakutori 3) is a Rune Factory game made for the Nintendo DS, and the third one on the system. It is a mix of simulation and role-playing elements. It was published in Japan by Marvelous Entertainment on October 22, 2009, on November 9, 2010, in North America and September 30, 2011, in Europe by Rising Star Games. It is also the fourth game in the Rune Factory series.

As with previous Rune Factory games, the player starts the game as a boy - this one being named Micah. He is taken care of by Shara as his alternate form, a golden Wooly. The main aspects of Rune Factory 3: A Fantasy Harvest Moon are farming, fishing, gathering resources, dungeon exploring, and combat. Later in the game, Micah is able to craft armor and accessories, forge weapons and tools, make medicine and chemicals, and tame and utilize monsters.

Rune Factory 3: A Fantasy Harvest Moon introduces new dynamic AI, ability to transform into a Wooly, inviting villagers to tag along with Micah, and a more fluid combat system. There is also a new multiplayer mode that allows friends to join the player in dungeon exploration.

The game begins with a golden wooly falling from the sky and and landing in front of a flower shop unconscious. An unknown girl, whom is later revealed to be Shara, brings the wooly inside and, much to her grandfather's dismay, proceeds to take care of it. The next morning, the wooly transforms into a boy and in a shock he rushes out of the flower shop, having no recollection of his transformation and no idea where he is. When he rushes out, he comes across a quiet girl, revealed to be Raven, who is found standing before the stairs that lead up the giant Sharance Tree. The boy attempts to talk to Raven, but she simply walks away. However, the two are intercepted by Shara. It is during Shara's meeting with the boy that he finally realizes that he has amnesia. He gives himself the name Micah, and Shara asks Raven to take him up to the Sharance Tree for her. Raven complies by simply bringing him to the house at the heart of the tree and intends to leave. Shara once again bursts in to intercept her departure and reveals that the tree house will be Micah's new home. Micah is at first uncertain of moving in, but is quickly convinced to do so when he is reminded of his amnesia. Shara then proceeds to give him a tour of the house. When the three go down to look at the fields at the base of the tree, Shara reveals it is the only place in the town where crops can actually grow. Suddenly, a hostile Orc charges on them and Micah must defeat it to protect the two girls. Shara explains that defeated monsters aren't killed and instead go back to the Forest of Beginnings thanks to the town's weapons and tools being imbued with magic. However, two more monsters suddenly attack. Thankfully, Raven had gone to retrieve Gaius, who throws Micah a weapon, and he is able to defeat them. Shara explains that the monsters in the area are usually gentle and the town's never had problems with them. However, lately there has been rumors of a group of violent monsters who have been in the area attacking people. Micah then accepts a request from Shara to meet everyone in town and ship one item. After completing this request, he heads to Privera Forest to defeat a Raccoon that has been stealing food.

After beating the Raccoon, Micah encounters a memory orb, which when he touches restores part of his memory. He remembers that he is half-monster, half-human, and can transform into a golden wooly. From this point on, he decides to keep his ability to transform a secret and heads out to find more memory orbs. The next place he goes to is Sol Terrano Desert, where he encounters a sentient race called the Univir. Micah learns that years before, the univir and humans lived in harmony until one day, the humans kicked out the univir, causing a hatred on both sides. Luckily for Micah, he has the ability to transform into a wooly, allowing him to gain the trust of the elder, Kuruna, and the others living there. The settlement is soon attacked by the Skelefang, which Micah defeats. He obtains the next orb and learns he was a town guard of someplace, and he hunts for the next orb. His journey takes him to the next area, Oddward Valley. After talking to Sakuya, Blaise, and Carmen, Micah discovers that a lion has been stealing food and decides to hunt it down. After defeating the lions Crimsone and Amaranthine, Micah retrieves the 3rd memory orb and learns that he was hunting 5 escaped monsters that came to Sharance, and that one more remains in Vale River. After going through the river, Micah hears a voice laughing at multiple locations. He soon discovers this voice is from the Death Wall. After a battle with the Death Wall, Micah recovers the final memory orb, which talks about the Sharance Tree needing to blossom.

Unsure of how to accomplish this, he heads to Wells, who blames the univir for it. After speaking to Ondorus, Micah learns that the only way to accomplish this is to unite the races, and the only way to do so it to tell everyone he is half-monster. After much trouble from both sides, the two races agree to reunite, and to do so at the Unity Festival. Although this makes the flowers on the tree bud, the flowers will not officially blossom until Micah gets married. After choosing his wife, Micah discovers on the day they are supposed to be married that she is nowhere to be found. After talking around, he discovers she was taken into the Dragon Cave.

Inside the Dragon Cave, Micah encounters 4 statues of the previous bosses. After feeding each statue its required food, he enters a spring where the 4 orbs go on 4 pillars. He sees the water is bright at a certain point and decides to jump in the water. Inside, he sees his wife-to-be weeping, but she will quickly disappear, and a water dragon named Aquaticus will appear in her place. Aquaticus insists that Micah doesn't belong here and that the Univir and Humans should never have been united. Instead of leaving, Micah decides to fight Aquaticus. Upon defeating him, Micah is reunited with his loved one. After a short conversation, Aquaticus reappears and apologizes for being so cruel, explaining all that he has done. He then tells Micah that he can either go back to his homeland or stay in Sharance, and Micah says that Sharance is his home now. Aquaticus then explains that the only way to make the flowers blossom is to have the guardian of the village get married after uniting the univir and humans, and that without them blooming, the land would wither and die. After their conversation, Aquaticus disappears, for he has accomplished his goal, and Micah takes his loved one out of the cave so they can be married. Then the credits roll.

After the credits, you will have a wife that lives with you and who will give you lunch every day, though she will continue to do what she normally does every day. 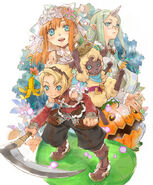