Rune Factory 2: A Fantasy Harvest Moon is the second instalment in the Rune Factory series for Nintendo DS. It brought new features to the series, such as the request board tasks, and adding the multi-generation gimmick from early Harvest Moon games. The game also contains some references to the original Rune Factory, including the reappearance of Cecilia as an adult. 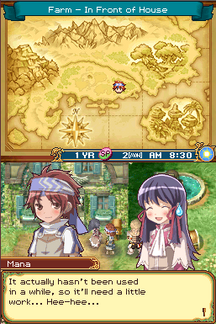 The plot of Rune Factory 2 takes place over two generations. In the first generation of the game, the protagonist is Kyle, an amnesiac who wanders into the town of Alvarna. There he meets Mana and her father Douglas, who lend him a bit of farmland to live on while he tries to recover his memories. As Kyle establishes his farm and gets to know the town, he settles in, attending festivals, raising crops, taming monsters, befriending the villagers, even getting married and having a child.

When Kyle builds a school for his child and beholds the completed building, the game moves to the second generation, and the main story really begins.

Kyle wakes up in the middle of the night, his memories returned. He realizes there is something only he can do, and begins to leave, but his eight-year-old child sees him leaving. He leaves them a scroll, and tell them they'll be able to read it when the time is right. From this point on, the child (Aaron if a boy and Aria if a girl) is the new protagonist. The updated game intro shows the two going through adventures together as a pair of twins, but they do not play as a duo.

The next day, Aaron and Aria's mother will wake them up for school. She will say not to be discouraged, go to school and be a good child. Even though Aaron/Aria agrees to do this, they secretly resolve to find their father.

Aaron and Aria set about uncovering the mysteries and magic of the dungeons, hoping they hold a clue to Kyle's disappearance. Being a child, they can fit through the barricades which blocked Kyle's explorations before. However, the dungeons have also grown more dangerous and host various bosses who need to be defeated.

In town, they also invest in the school, expanding their access to magical knowledge, new weapons, and combat training so that they can explore further. They also build expansions to the Barn so that they can host more monsters to help run the farm and fight beside them in dungeons. When the barn goes deep enough, they discover a hole at the bottom!

This portal leads to Palermo Shrine, which holds several floors and introduces a puzzle-solving element to dungeon exploration. It also contains the toughest monsters yet. As they approach the final boss of the dungeon, Aaron and Aria finally catch a glimpse of their father Kyle. They pursue, but have to face off against a dragon named Fiersome! After defeating the dragon, Kyle will make one more appearance to inform Aaron and Aria that he was infused with Fiersome and also must go to The Forest of Beginnings.

Aaron and Aria change their goal, resolving to bring Kyle back. Each of the seasonal dungeons, and with the dragon defeated, the secret shrine in each dungeon is accessible. If they are all unlocked, Aaron can use the mysterious tablets from each dungeon's statues to access them and summon their father back. At first, it appears not to work, but the next morning, Kyle returns! The family gets to live together happily ever after.

During the first generation, Rival bachelors can also marry the bachelorettes if Kyle leaves them single. Rival marriage dates can be found on each bachelorette's character page. In the second generation, Aaron and Aria can also have a mock wedding with one of the second-generation bachelors or bachelorettes. This happens by completing all of the character's bulletin-board quests. Although the wedding is only pretend, Aaron and Aria can only perform the ceremony with a character of a different gender, with the exception of Sera and Serena, who can mock-marry either Aaron or Aria.

The "weddings" are just play weddings, as Aaron, Aria and their romantic interest are only kids. Their new "spouse" will not live with them; they will just thank Aaron or Aria for playing with them after the "wedding". However, like a marriage in the first generation, the game skips a full calendar day for the wedding. Unlike the first generation, Aaron and Aria can marry as many of their friends as they like.

See a complete list of pages associated with this game on the Category Page. 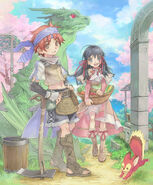