Hungry, confused, and possibly forgotten, Raguna arrived at the outskirts of Kardia with nothing but tattered clothes at the beginning of the game. Shortly afterwards, a strange girl named Mist finds him collapsed outside her house and offers him food and water, coming back with a hoe and Watering can instead. With nowhere else to go, Mist agrees to let him stay in her farmhouse as long as he complies in planting crops after clearing the fields. Things take a strange turn when she shows him the fields, as a monster appears out of thin air. After Raguna defeats it, Mist explains that monsters appearing without the prompting of an Earthmate is rare.

Raguna's mysterious gift for combat and farming is exactly what Mayor Godwin needs. With all the caves and ruins mysteriously overrun by monsters and machines, Mayor Godwin decided that no adventurer alone could set foot into the dark caves without obtaining a special permit. After convincing Godwin that he can handle himself, Raguna is allowed access to Carmite Cave by tilling 100 square of your finds. He finds that some of the monsters are much larger and more dangerous than they had first suspected. He is given access to Toros cave as well, after plowing 50 squares of land in Carmite cave. Here he, Mist, and Zavier find another stronger than average monster hidden in the depths of the cave.

At this point, Godwin feels that Raguna needs to spend more time getting comfortable in town and refuses Raguna the next pass. However, when Raguna enters the library, Russell comes up to him in the panic. Cecilia has vanished, and he's worried she may have disappeared into one of the local caves. When Raguna takes these concerns to the mayor, he is equally concerned, and gives Raguna passage to Clemens Cave to go search for her. Raguna and Melody, who is looking for a place to open up a new hot spring, both enter the cave. Cecilia is found and helped back to safety before Raguna delves deeper into the cave. At it's deepest point he finds yet another large monster, and after defeating it he, Melody, and Mist speculate on why the monsters are appearing. Norad doesn't have the technology to force monsters out of the Forest of Beginnings, but the Sechs Empire might.

With Clemens cleared, concerns about the monsters growing. Godwin grants Raguna access to Mt. Gigant, after you till 100 squares of land in Clemens cave. Here legend has it that the legendary dragon Grimoire lives at the summit. Raguna scales the mountain and defeats the Grimoire, but it turns out not to be the dragon from legend. After Raguna leaves, a mysterious woman appears and muses that things are going better than she had expected then disappears. Though she is unseen by Raguna.

After tilling 100 squares of land at Mt. Gigant. Unlike other caves, come winter, when the lake freezes over, is the only time Raguna may enter Misty Bloom cave. After defeating the large monster, a Siren, hidden at the end of the dungeon, he and Mist discuss Raguna's mysterious past. Although Raguna is no closer to remembering who he is, Mist feels that someone as responsible as him was probably an important person. After Raguna defeats the monster in the depths of the Kasmir Ruins as well, Mist decides that it doesn't matter who Raguna is, because he's a member of the town now.

With rumors swirling that the Sechs Empire are doing something in Danaan cave, Raguna heads there next. At the far end of the cave he finds the woman who appeared at Mt. Gigantt. She introduces herself as Lynette, a Sechs soldier. She reveals that the Sechs army has been exploring the surrounding area in hopes of finding the Grimoire. Mist is appauled by the methods the Sechs have been using, but Lynette feels it would be a waste not to use the Grimoire. As the area where the discussion occurs was meant to capture the legendary creature, they have additional machines set up for battle, and she proceeds to unleash a tank on Raguna. After the tank is destroyed, Raguna and Mist tell Lynette that since her plans have failed, she should return to her own country. She escapes, vowing that she won't forget what has occurred.

With all the suspicious activity in the area, Godwin immediately grants Raguna access to the next cave. Raguna ventures into it, and finds Lynette again in a room full of strange equipment. She claims that thanks to Raguna, destroying all of their monster summoning machines, she can now activate the final phase of her plan. She turns on the equipment and summons a dragon to the room, which Mist recognizes as Terrable, one of the four dragon gods. Grimoire is actually a name given to young Terrable, and the Sechs were aware of this one for some time, but had been unable to summon it.

That's where Raguna came into their plan. All of the machines they set up were there just for him to destroy. Raguna is, in fact, an Earthmate they found some time ago. The machines weren't meant to summon monsters so much as to harvest his own energy and make the summoning of Terrable possible, with the destruction of the tank providing them with the final energy they needed. To ensure that Raguna would play the part, they even erased his memory and dropped him off near the village.

With much difficulty, Raguna is able to defeat Terrable, and return it to the Forest of Beginnings. Lynette reappears and laments that you have destroyed her life's work. Another man, who refers to himself as the Sechs' Emperor Ethelbird, appears as well, and demands that she take her life as punishment. He has no desire for useless subordinates, she doesn't kill herself and, instead, comes back to town and stays their.

Lynette is persuading not to kill herself, but Ethelbird still intends to invade. Terrable may be a lost cause, but he still has 100 tanks just across the border.

Raguna hurries to warn the town, and they all plan to evacuate. He and Ivan then go to the border to face the tanks. As Raguna and Ivan ready themselves, a great shadow passes overhead. A full grown Terrable has appeared, and it sets it's sights on the Sechs. It uses a breath weapon on the tanks, which causes the area around them to become overgrown until there is too much plant life clogging the machines for them to move. The Sechs are forced to abandon their plans to invade, and with no functioning vehicles, must walk all the way home.

The villagers arrive shortly after, and applaud Raguna for helping save them. Amidst the celebration, no one notices Ivan, who silently thinks that Raguna is happy there before he leaves.

Ivan goes to the capital city of Norad and meets with King Gilbert. He thanks the king for letting Terrable join the fray, and the king says that is was possible since Ivan was there, as he is one of the few members of royalty who Terrable trusts. The two discuss Ivan's long lost brother, who vanished when they were children. It seems that Ivan disguised himself as a merchant to search for his brother, who rumors led him to believe had turned up in Kardia. However, Ivan says he thinks he made a mistake assuming that Raguna was the missing royal. 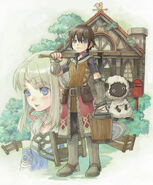