The player can form relationships with the residents of Selphia and the marriage candidates (see bachelorettes and bachelors). Rune Factory 4 introduces the dating system to Rune Factory series. 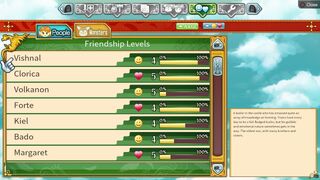 Each villager has a Friendship Points, or FP for short, represented by a level and a progress bar. All friendship levels can be viewed on the Friendship Levels tab. It is the second right-most tab on the game menu.

The points needed to reach the next friendship level is dependent on the current level. Check the table below for more detailed value.

Friendship points can be increased with each villager by:

Friendship points can be decreased by:

If you haven't talked to a character for a long time, when you talk to that character again, they will bring up about haven't seen you for a long time. This event will not decrease the friendship point.

The FP needed to advance from level 1 to 9 is predetermined, as shown in the table. From level 10 and above, the FP required is always 336 FP and stops at level 10,001. The progress bar will stop changing when the friendship level reaches level 202. From this point on, the FP will still increase with no progress indicator. The progress bar will be empty again when the friendship level reaches level 10,000. The FP value can still increase until 3,358,321 but the level will stop at 10,000. The progress bar will not move again after this point. After reaching this level, any effort to increase the FP will have no effect.

Doug friendship level will not raise above level 3 if you haven't finished the second story arc. 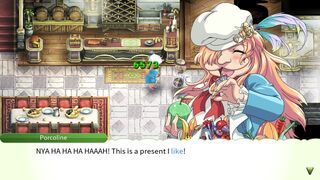 Each character has their likes and dislikes. This will affect how many friendship points are gained or lost when giving the gift. If you give them a gift on their birthday, the FP is doubled (x2).

In Rune Factory 4, there are 4 taste categories: love, like, neutral, and dislike. You can see these categories in the game based on each character's response when you gave them the present.

The points gain or lose from each taste is different for each item. There are two type of points changes for each love, like, and dislike categories.

There is no known pattern for the points given by each item except that it is different for each character. Please refer to the specific item page for more information on how many points you could get.

An example of this is giving

Golden Turnip. He will react as if he loves the present, but will only add +9 FP.

You could give each character one item per category per day. So to maximize the gain, you would need to give the character one item that they love, like, and is neutral in one day. The friendship points effect will be indicated by the conversation with the character after giving the gift. Any subsequent gift that did not trigger any conversation, does not count toward the friendship points.

This gift limitation does not apply to the

Love Potion. You could give multiple of this item in one day and still got the friendship points bonus.

The player can have a romantic relationship with some characters. Every marriage candidates will have a heart icon in the friendship levels tab, while the non-marriageable one will have a smiley face.

After you raise the friendship level to level 7, you can confess your love to them. You can do this by triggering the "BTW..." dialog and choosing the "I like you!" option. If they accept your confession then you are officially a couple. You could have multiple partners in this game but the more partners you have the harder it is to confess to a new one. If they reject it, you might need to increase the friendship level before you even have a chance to confess again. 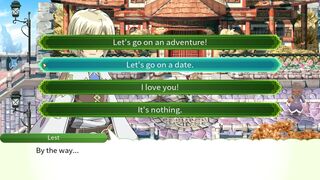 Any choice in the date including sending the partner home does not affect the FP gain.

If the first date happens after friendship level 10, the date will only reward +55 FP. Any subsequence date after the first one will give +55 FP.

There are some festivals which can have special effects on the friendship points: 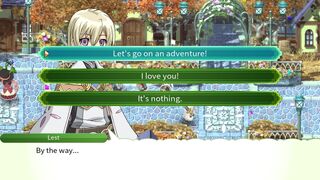 When the friendship level reaches a minimum of level 3, you can form a party of three with that character. You could ask them by triggering the "BTW..." dialog and choosing the "Let's go on an adventure!" option. When the character accepts the offer, a happy “success” jingle will play and a health bar will appear over your party member’s head.

There is an exception for

Forte, you can party with her on any friendship level after you meet her as the player exit the town for the first time. Another exception for

Doug is that you need to finish the second story arc before you can party with him even if the friendship level has already reached level 3.

At this stage, they will only stay at your party up until 19:00. But if you are on a special battle such as a boss battle at 19:00, they will not leave your party and you can take them with you until going to bed.

After you raise the friendship level to level 7, your party member will stick with you for 24 hours and will never leave the party.

By adding character to your party, they will gain +1 FP per 45 game minutes with a maximum of +10 FP per day. They will gain a +1 FP immediately when you succesfully invite them to your party. With this, you will need to keep them in you party for 6 hours and 45 minutes to gain the last +9 FP.

To split up with your party, talk to them and choose the "Let’s split up here." option and they will immediately leave the party.

Although it is possible for Lest or Frey to initiate relationship with a marriage candidate at 4 or 5 LP, the success rate of the confession actually being accepted will be higher if the LP is higher. The more candidates the player is currently dating, the less successful they will be when initiating a new relationship. If there is currently an event involving the target, they will always decline until the event's completion. Dolce and Leon cannot be courted until the end of first story arc, while Doug cannot be courted until after completing the second arc.

Upon dating, the player can take their partner to specific areas or may ask that person to make a decision for them. Notably, having a date in Bado's Blacksmith or Illuminata's shop will yield items for the player. Additionally, there are holiday dates that the player or their partner may invite each other to such as the Firefly Festival. During dates, the player may also do something extra with their partner to increase their intimacy such as holding hands or hugging. They can also escort their partner home, but this option will not increase any FP.

If the player stands their date up, their partner will refuse to properly talk or accompany them in any capacity until after a few days. It is not possible to end a relationship except when the player marries someone, and they will automatically break up with any other candidate they are currently also dating and will cancel any date not with the spouse.

In order to marry someone, players must trigger at least two events: one sub-event in which the player gets to know more about their chosen marriage candidate, and a marriage event in which they will propose or be prompted to. As with all events, these will trigger randomly. However, the marriage event will not happen until the player is currently dating them, goes on at least three dates, has viewed the sub-event(s), and their sweetheart has 10 LP or more. For the bachelors and Xiao Pai, the sub-event will also include the marriage candidate involved trying to propose to the player. If the latter turns them down, they will still be able to propose later on.

Before proposing to a marriage candidate, the player must have both a double bed and an engagement ring, the latter of which can be crafted in the crafting table when are at Level 20 crafting skill (recipe must first be acquired). However, the ring is not needed during a reverse proposal. If there is another event involving the spouse or another ongoing marriage event, it will not be possible to marry until the event's completion.

Once they are married, the spouse will move into the player's room and always wake up side-by-side if the latter sleeps at home. The first conversation of the day with spouse also shows them giving the player a food item before a hug.