Ray seems to be a peacemaker in his house, as he doesn't like it when his mother and sister fight. He also retreats to his room upstairs when Natalie is drinking with Gordon and Douglas. He wants to be a doctor when he's older, and has a quiet, caring manner with his friends.

Ray has the same silvery-pink hair as his sister, which he wears in slim pigtails. He has pale blue eyes and wears a vest, pants and cloak in a mint-green shade, resembling scrubs. He has a white shirt-collar and a dark leather apron with pockets for tools.

Ray is Natalie's son and Alicia's brother. He serves as the middleman between them, mediating their fights and trying to help them find common ground. He also enjoys the company of Rosalind, and visits her on festival days. He doesn't seem to have many other friends in town, perhaps due to his introverted nature.

If Kyle does not marry Rosalind, Ray will marry her on the 17th of Spring in Year 3. If Rosalind is married at that time, he will marry Yue. Either way, he will have twin daughters named Sera and Serena.

Like his mother, he strives to one day be a doctor and can almost always be found in the clinic, minding the front desk. He is a caring friend to Kyle and reminds the farmer to mind his health and avoid overwork.

In the second generation, Ray has succeeded his mother as the town doctor, with Dorothy as his nurse.

Ray works in the clinic from 9:00 AM to 6:00 AM most weekdays. On festivals, he visits Rosalind near the Mayor's House in Alvarna - West End. 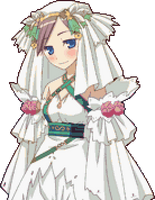