A sweet ray of sunshine who was born and raised in Rigbarth. Tends to make many mistakes in her day-to-day life, but people forgive her due to her kind and cheerful nature. Prepares well in advance for any event, making her surprisingly dependable. Some past incident has left her too terrified to leave town, but she wants to overcome this fear.

Priscilla (プリシラ, Purishira, Priscilla[1]) is a character in Rune Factory 5.

Priscilla often refers Earthmates as Earthmaids in her dialogues, stating: "When I was little, I read stories about Earthmaids who rode dragons through the skies..." She will explain the function of the projector, calendar, and bed afterwards. If the player tries to escape the second floor of silo when Priscilla tells them to go to bed, the former will exclaim *YAAAWN* The sweet siren song of sleep steers me toward slumber.

Priscilla is a bashful, yet kind and cheerful girl. She is afraid to leave Rigbath due to a past accident, but tries to overcome this fear.

Priscilla has light skin and pink hair in low ponytail braid, adorned by a headband of light green and blue with a black hair clip on the corner. She has blue eyes and noticeable blush. Priscilla wears a white army dress, white stockings, and black flat shoes with motifs. If the player is dating Priscilla, she will reveal her long hair.

Priscilla attempts to visit town with Lucy cheering her from behind. Hina will arrive alongside the injured player and the group take them to the clinic. Initially, she and Lucy will act as volunteers for SEED, but after the player clears Belpha Ruins, the two girls meet at the Great Tree Plaza and reveal that they have quit since they are no longer needed and ask the player for advice on their new part-time jobs. Depending on the player's decision, Priscilla may become a new clerk at either the bakery or general store.

Priscilla will be found wandering near the town gate once again after being asked to find mushrooms by her sister. Because Priscilla is scared to go alone, the player decides to escort her to the Whispering Woods. As soon as they arrive, Priscilla finds some mushrooms and thanks them for their help, stating that she would never go out of town alone.

Priscilla explains that she ended up getting hurt when she left town when she was small, and this had left a traumatic effect on her. She swears to eventually overcome her fears and go an adventure by herself one day. The player suggests she also gain input from others to help make herself braver. The next day, Lucy brings in the three bravest persons at the Great Tree Plaza: Murakumo, Fuuka and, Julian. Murakumo first steps up as his bravery came from his physical strength which helps build his confidence. Fuuka then states that she never has any fear chasing after shiny things or butterflies. Julian is finally asked, he says he never really bothered to think himself brave. At that moment, Randolph arrives and Lucy asks for his advice on the matter.

Randolph states that when he was younger, he once visited an unknown land and a massive monster attacked him. Randolph ran until backed into a corner and scarred his eye. While half of him wanted to give up, the other wanted to continue on fighting, and he eventually drove the monster away. He explains that should the situation push for it, everyone will be able to find their own bravery.

Priscilla stares out to the sea and explains that she was waiting for an old letter to return. When Priscilla had been hurt previously, a stranger rescued her but left before she could properly thank them. As a result, she tied a letter to a balloon and released it to reach the person who rescued her.

Priscilla, Beatrice, Julian, and Hina play prince and princess at the Great Tree Plaza. Hina decides the player as the role of prince and is tasked with rescuing the four "princesses". The four then split apart as the player must rescue them.

Beatrice will be at her home in Belpha Ruins, where she is held captive by Reinhard, who forgets this is merely a game and nearly attacks the player until being reminded. Julian runs to Simone at the Rigbarth Clinic, but Simone acts her role too seriously by claiming to have a secret elixir that will turn Julian into a girl since he doesn't want to act like a princess. Hina is with Murakumo at The Blue Moon, where Murakumo begin crying after his defeat because Hina always used to treat him as her hero in the past. Finally, Priscilla is at Studio Palmo and is captured by Palmo, who constantly messes around with the story by claiming the player is supposed to be his "long lost child". Initially, Priscilla and the player scold Palmo, but he changes his tune and asks the player to confess their love to the princess instead to let her go.

Although the player has the option of saying that they love either "the Princess", or "Priscilla" or may not even be able to confess at all, Palmo will still release her as the player has shown their genuine love by coming and releases Priscilla. At the end of this game, once all four princesses have been rescued, the player as the prince is ordered to marry one of the princesses except Julian, and award their new bride with a kiss on the cheek.

If Hina is selected, Julian complains that she is still just a child and pulls her away, much to her disappointment of not being the player's bride. If the player chooses Beatrice, Priscilla abruptly stops the kiss, and Beatrice quickly reads the situation and states that the prince actually chose Priscilla according to the script. Despite being slightly confused, this causes the player to kiss Priscilla instead. If the player chooses Priscilla, they will still kiss her without incident.

As soon as Beatrice reads the story's conclusion, Hina points out how embarrassed Priscilla is, but she immediately flees the scene. Throughout this event, the player's warp system will be disabled.

While visiting the Great Tree Plaza, Fuuka reports to the player, Lucy, and Priscilla about a balloon with a letter floating around the eastern area of the Phoros Woodlands. Priscilla immediately jumps upon learning of this and races to the cave by herself. When the player finds her, Priscilla is disappointed to learn that the balloon in question was her old letter. After returning to town, Priscilla resolves to continue writing her letters until one can finally reach her savior.

The next day, the player spots her arguing with Lucy, this time Priscilla is leaving town by herself to visit her parents, with Lucy warning her not to go alone. Later on, the other villagers comment that this sudden recklessness was brought by her newfound bravery and freedom as they had kept her too sheltered since her previous incident. Once Priscilla returns, the player spots her buying several medical supplies from Simone. Afterwards, the player visits Lucy and Elsje at the restaurant, the latter passing a letter stating that her parents also investigated the event, but found that their daughter's savior had vanished after the incident, and that she was involuntarily holding herself back in remembering the person's identity.

Lucy immediately realizes that Priscilla was planning on returning back to Belpha Ruins. She then details that on the day, the pair were going to have an adventure together looking for a miracle potion. Lucy, eventually decided against the trip, and failed to convince Priscilla to stay behind. Priscilla needed to be carried out of the ruins and was covered in blood by the time the others reached her. Lucy quickly urges the player to follow Priscilla's trail to the end.

As the pair reunite, Priscilla's memories finally return, and she remembers that it was actually the player who rescued her all the years before when Livia blasted through her seal. When the player escorts her outside, she reconciles with Lucy for her rebellious phase recently. After the two girls make up, Lucy begins to wonder about what the future between Priscilla and the player would entail.

Priscilla is best friends with the more outgoing Lucy who often tries to push Priscilla to overcome her shyness. She also occasionally has to take care of her sister, Elsje due to her typically being lazy. Priscilla is also among the few that are able to properly understand Fuuka. She does not want the whole world to see the inside of her mouth due to yawning because it's too embarrassing.

Priscilla can accompany the protagonist in battle. Her starting weapon is a staff. 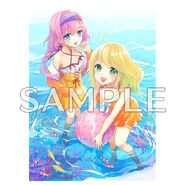 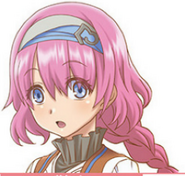 ”I'm asking a lot from everyone in the town ♪"

Jeez, even I wouldn't fall asleep during the wedding[2].

Well then, you probably won't fall asleep in the middle of the ceremony[3]. 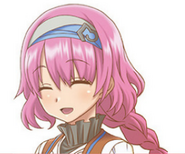 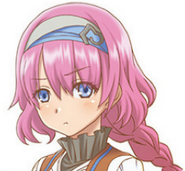 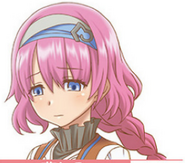 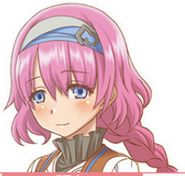 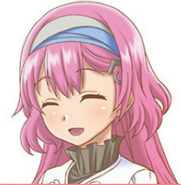