A chef who owns the local eatery. A merciful weirdo helping anyone in need, who thinks of Margaret as if she were his own daughter. If he offers to cook you a meal, watch him, or else he might scarf it down himself before you can even get a bite.

"The owner of the local restaurant and a glutton so legendary that the food he cooks for his customers often don't make it to the table. Still, he's also known for his imeasureable kindness, caring for Margaret like a daughter and housing both Dylas and Arthur while expecting nothing in return."
―Website Description

Porcoline is a very skilled chef, but because he chows down while he cooks, his efficiency is amazingly low, no matter how many ingredients he has with him. He's a kind person who helps those in need.

Despite being male, Porcoline has the appearance of a woman. He has pale skin with blue eyes and long peach hair, which is adorned by a white chef hat with feather. He is chubby.

Oddly enough, he is proficient with dual blades, as his default weapon is two cooking ladles.

Prior to arriving in Selphia, Porcoline visited the elven kingdom, where he scouted a young Margaret, who aspired to travel around the world. At the same time, however, a famous composer had scouted her as well, and Porcoline allowed him to make his offer first. The composer, however, passed away due to illness and Porcoline would take in the depressed Margaret in the hopes of helping her overcome her fears in having relationships with humans.

During one of Doug's pajama parties, Dylas will mention that Porcoline once had an elven lover that died to sickness. It is implied to this pushed him to share his hospitality to great ends.

How to Make a Pile of Money
Characters: Bado, Vishnal, Forte, Porcoline, Margaret, Arthur
Porcoline speaks with Bado, who claims to have a waterpot that can help plants grow, and a Cluckadoodle that lays tasty eggs. Initially Porcoline and Margaret see this as an attempt to scam people only for it to be pointed out that Bado wasn't lying about the product, but over-exaggerating the things they normally do.

A Favor Repaid
Characters: Porcoline, Margaret, Dylas, Arthur
Porcoline will report to the player that Margaret, Dylas and Arthur are all planning something behind his back and asks the player to investigate. As the trio are planning a surprise party for their caretaker, the player is asked to entertain Porcoline for the rest of the day.

He will be asked to be taken to the front of Yokmir Forest, where he opens how he first met Margaret, and how he considers her, Dylas and Arthur to be his foster children. Porcoline then asks the player to become his real family. When he is rejected, he decides to spend some extra time alone at Yokmir Forest.

The next day, however, Margaret reveals that he has gone missing. The player and Margaret eventually find that he had simply fallen asleep at Yokmir Forest. Dylas and Arthur then arrive apologize for acting behind his back but bring him to his thank-you party. Porco later returns. While the trio offer their thanks to the player, Porco offers a private dinner. Nonetheless he returns to his restaurant.

A Porco and an Elf
Characters: Porcoline, Margaret, Illuminata
Porcoline will be found by Illuminata and the player, who find him speaking with a female traveller. During this, Porcoline is asked if Margaret is doing fine. Although he replies positively, he is then asked if they are still dealing with their losses. In response, Porcoline responds that he cannot give a good answer and that having her return home in such a state would only make her feel like running away from the actual issue.

Eternal Rivals
Characters: Doug, Dylas, Porcoline, Blossom, Margaret, Vishnal
During another one of Dylas and Doug's arguments, both claim to have the harder job than the other. As they are making a scene within the restaurant, Porcoline manages to stop the entire scuffle. In order to resolve the issue, he and Blossom agree to swap Doug and Dylas for the next few days. During Doug's tenure as a waiter, he struggles to manage organizing the dishes and the placements of ingredients.

Shiny Memories
Characters: Blossom, Doug, Xiao Pai, Arthur, Margaret, Porcoline, Ventuswill
Porcoline's restaurant is raided by Twinkle during its outing. Although Porcoline catches the bird before it can do any damage, and releases it shortly after.

The Running Sign
Characters: Dolce, Pico, Nancy, Jones, Kiel, Forte, Xiao Pai, Lin Fa, Porcoline, Margaret, Arthur, Doug
Porcoline's restaurant will be among the many shops in Selphia that is vandalized by the sign.

Being Here
Required to marry Margaret
Margaret reminisces of her teacher and falls into depression, forcing Lest to ask Porcoline for help. Porcoline then visits Margaret's cabin, revealing her fears. While she was able to move on from the death of her teacher and will likely do the same for himself, he points out that a new exception to this had arrived; Lest. In retaliation, a tearful Margaret angrily retorts if he truly did understand her pain and runs away. An emotional Porcoline then requests Lest to chase after her.

When the pair return, Lest tells Porcoline and the rest of the town that Margaret was attacked by a siren that stole her voice. Porcoline will then use his contacts to try and find a cure for her.

Porcoline is the adoptive father of Margaret, and he takes Dylas and Arthur in as well. He asks Lest or Frey to marry him quite frequently, but will never accept an engagement ring from either.

There is no complete schedule. 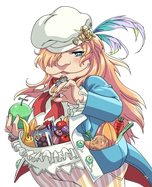 Porcoline in the quiz contest