A friendly ghost girl who is very fond of Dolce. She will draw you into Marionetta's dungeon when she first starts showing up around town.

Pico has light skin and light purple hair worn in big pigtails held by red ribbons. Her green eyes have no pupil. She wears a light pink and purple jester cap with a cute face in the middle, as well as two yellow stars hanging from both horns.

Although Pico is an individual character, she never appears unless the player approaches Dolce first.

Once Marionetta has been defeated, Pico and Dolce will live with Jones and Nancy in the Tiny Bandage Clinic.

If the player befriends Dolce to 10 hearts/friendship points, he/she can make an order to let Pico wake him/her up.

Pico adores Dolce and often says things that embarrasses her, as well as calling her "Dolly", her affectionate nickname. She seems to have an obsession with Dolce, possibly a crush as it's hinted through dialogue and her nickname from Dolce "Pervert". Since she is a ghost, she cannot go too far away from Dolce or her soul will pass on. Her being a ghost has had advantages as well, being the only constant friend Ventuswill had for centuries, even before Illuminata. Due to her need to stay near Dolce, Pico may be one of the oldest villagers in town.

Note: All of these nicknames come from Dolce 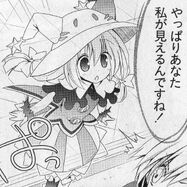 Pico in the manga.