An author of evil who is meditating world conquest. Nobody really takes her seriously.

An evil mistress who is always trying to take over the world but is never taken seriously. She enjoys calling her friends minions, not revealing her happiness that begins to grow on the island. Over time, a dark secret of which even Pandora is unaware of is revealed (which is available when playing as Aden).

Pandora has long, silver saber-tooth tusks that go down to her waist with two chin length moustache strands that frame her face. She wears a bejeweled ornament that drapes her forehead. Her skin is pale. Her eyes are violet and she has pointed ears. Pandora is seen with a purple scarf magically floating around, often twisting and turning to portray her emotions.

During summer, she wears a blue one-piece swimsuit with white frills.

Pandora is first encountered as a stone statue found while completing Mikoto's "Something Hidden Beneath the Waves" request. Shortly after her statue is brought to the main character's home, Sierra will ask to meet at the port entrance of the seaside caves after dark. During this event, the main character will see the ghostly visage of Pandora in the cave. The next night, the main character is awakened by Pandora and the adventure begins to restore Pandora. Pandora will NOT live in Aden's House until she reaches Friend/Love level 1, during which she'll materialize, move to the Church, and live in the westmost room.

Apparently instead of a spell gone wrong it was actually a spell to turn the world to stone. This will make Aden angry for being lied to, and will say that he should take her down right now for the sake of the world and everyone in it. But this makes Pandora happy, saying that he will be a feisty minion. She then declares Aden Minion number one, which makes Sonja upset but Pandora says that she can be number two that makes Sonja happy again.

Aden thinks that it is ridiculous to get upset over what number minion she is, and as he's about to leave Pandora says that he wasn't very nice to Sonja when she was a statue. Aden then starts making up excuses, saying he 'would have been more careful if he had known it was a person.' She then says that she will be monitoring him more carefully, which slightly upsets him again.

If the player accepts the request "Something Hidden Beneath the Waves" from Mikoto, go to the island on the map. When the player does, there will be a group of goblins, defeat them then open the treasure chest, pick up the statue then go home. There should be a scene where the player puts the statue in their house. The player must also tell Mikoto that one found the island. After this go talk to Sierra, the music will change and she will claim that there is a ghost by Fenith Port and that the player should go and investigate with her. Agree and then go there after 6 PM. There should be a group of people there, go near them and watch the scene. Go to bed and the next day Pandora will be living at the player's house. To restore her, the player must get her heart level up to 1 and on her 1st friendship event you will achieve this.

Pandora tells Aden that the reason she travels around the island so much isn't because she has no place to go, but that simply wants to admire the island that will ultimately become hers. This is most likely a lie designed to save face, since she has no real attachment to the island (no job, no house, no initial friends save Aden/Sonja) and is wandering simply because she has nothing else to do. It also explains why she spends so much time at Aden's house; Aden and Sonja are her only friends.

Although she starts off with no friends aside from Sonja/Aden, she appears to grow some relationship with Kelsey and Quinn, spending some time with them in the church on a regular basis. This is probably because as children they are more quickly & likely to accept her, and also because their rooms are directly next to each other. Also, since they're kids they, like her, don't have any true obligations and have a lot of free time.

If Kelsey's birthday is coming up, Pandora will order the player to bring him a gift and state that she already got one for him.

Early mornings she can be found in the bath house then makes her way towards the Church inside a room that the player cannot enter until 9 AM. She is often back and forth between the player's home and the Church.

Pandora in the opening of Tides of Destiny 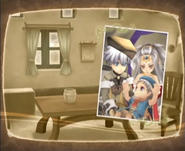