A Bandit on the Loose Near Rigbarth

"Now then, let's see just how big this score is."
―Oswald

Oswald (オズワルド, Ozuwarudo, Oswald[1]) is a character in Rune Factory 5.

The leader of a bandit group comprised mainly of social misfits and those who have nowhere else to go. If there's trouble, then you can bet that he has something to do with it.

As a self-proclaimed Bandit King, Oswald was among those paid off by SEED for their dirty work behind the scenes and had a hideout in the east of the Phoros Woodlands. Oswald himself was an agent of SEED's warden, Gideon, and was tasked with helping Radea absorb corrupted runes. Oswald would be found by the player and Scarlett causing a disturbance at the Kelve Lava Caves, and is defeated and captured. As soon as he was sent to SEED HQ, Oswald escaped, though it is implied due to Gideon's handiwork, and continues his mission at Atohl's End, where he attempts to have Radea suck out the player and Scarlett's energy.

Unexpectedly, Radea began to suck out his own energy, and Oswald was forced to use a concealed Rune Crystal to save himself. After Randea leaves, Oswald is captured once again and is taken to Livia where he promises to reveal everything in exchange for amnesty. Oswald would explain that SEED had bribed multiple bandit gangs into waging war against other gangs and to keep things relatively quiet in town. He also revealed that the disturbance at the Meline Crystal Caverns was caused by Gideon himself, which is confirmed by Lucas not recognizing Oswald. Oswald tells Livia that Gideon's current goal was for absolute order, and since Gideon considered him as an expendable pawn, sending him back to SEED HQ was now as good as a death sentence.

Concurring with Oswald's statement, Livia honors her bargain in allowing Oswald to escape without reporting to SEED. After the player takes a leave of absence from SEED, Oswald will privately contact them at the Belpha Ruins at midnight, where he asks for the player's help. Since his second capture, Gideon had now unleashed monsters to attack Oswald's hideout. Oswald and most of his followers had escaped with the exception of Ludmila, and he asks the player to save her.

Once the player safely returns with Ludmila, Oswald decides to continue life as a fugitive. Rather than take Ludmila with him, he encourages her to finally settle down in the village since she was not involved with Gideon's work at all, and that the player and Livia would certainly be more sympathetic to her.

The player ends up looking for him afterwards when Radea reveals that he once took her to Gideon's headquarters on one occasion. Oswald would be found hiding within the treasure room of Basara's Hideout, where he reveals that the base is in the sky, and that the only way to enter was through one-way gates that were always patrolled by Gideon's subordinates. 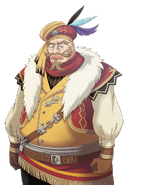 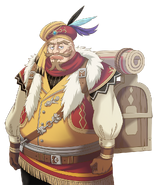 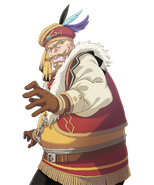