A univir who has been friends with Kuruna for decades. He loves reading books about almost any subject.

Ondorus is very studious, reading as many books as he can get his hands on about various subjects, and he exhibits an intellectual curiosity about the ways of the world. While he doesn't flaunt it, he takes pride in his heritage, only angered when it is mocked or insulted. Otherwise, he bears a calm disposition and generally maintains a friendly attitude towards others. He is one of the most patient, reasonable and diplomatic characters in the game.

The cape constitutes the formal attire of the univir, but Ondorus personally likes to wear his cape, in spite of the desert heat, because it reminds him of the hero in a story he enjoyed when he was young.

He is always studying a new subject, hypothesizing that elves and univir came from a common ancestor, due to their sharing of pointed ears. He comments that vision problems are no more common among univir than they are among humans, and that he and Kuruna both wearing glasses is a coincidence.

He has turquoise runic patterns on his face that are not presented in his concept art.

Although Ondorus doesn't always agree with Kuruna's decisions, he unfailingly defers to her leadership and respects her. Kuruna always values his input.

His magical prowess will be necessary in unlocking the doors of the ruins on the other side of the lake.

Could someone help me?

Formula A on the cactus in Sol Terrano: Cactus Cove.
Reward: Lightning Staff
Note: Ondorus provides the Formula A for completing the request.

Having known Kuruna for decades, they are close childhood friends. When they were young, they would often sneak away from home to gaze out at the vastness of the desert and the stars in the sky. Back then, the Star Dunes felt like their secret hideout. Now, as well as being a close friend, he acts as an advisor to her, as she often seeks his counsel and trusts his knowledge. He can be somewhat brotherly towards her, in that he worries about how other people might perceive her, but tries (and fails) to keep Kuruna from finding out how he occasionally meddles in her business. While both of them are serious and practical, his overall worldview differs greatly from that of Kuruna, unfiltered by prejudice or hatred, as he is more sensitive to the needs of living beings and the land. Furthermore, unlike Kuruna, he sees the benefit of uniting with humans, though he is unsure how to convince his long-time friend of such after meeting Micah. Efforts, however, do pay off.

Alongside Kuruna, Ondorus is somewhat of a guardian figure for Zaid, ensuring that he doesn’t cause any trouble and stays in line. While he’s stern, he ultimately does trust him in times of trouble.

After the Unity Festival, he can be found frequenting the apothecary from time to time. On festival days, he will be chatting with Zaid outside the Sharance Tree. 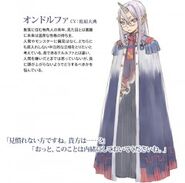