The second eldest of the three sisters at the inn. She's bright and straightforward. She's also good at cooking, and always trying to cook something new.

She appears to be a very vengeful kind of person, or at least one to quickly respond to any questioning of her capacity. This is best example by her first few friend/love meter cutscenes, where Odette sets out to prove to Aden that she has the capacity to cook and cook well because of a short comment Aden made during their first meeting.

Odette also worries about the scar on her right cheek, which she obtained as a child. While attempting to play cook by herself, she tried to use a knife to cut a rock, causing the blade to shatter in her face and leaving the scar. The scar is apparently hard to notice unless the light strikes it right, but it still is a source of much anxiety.

Odette is very competitive, especially at subjects she's skilled at. In most festival-based competitions she participates in, she usually is "in it to win it" and gets flustered when she doesn't get first place. This is apparent in the Miss Fenith Contest, the Warrior Contest, and the Cooking Contest among others.

Odette has a scar on her cheek from when she was little and tried to cut a rock with a knife. She usually wears practical clothing that is comparatively less complex than other members of Fenith Island

She wears an hot-red bikini during Summer, one significantly more vibrant compared to her regular clothes.

At a certain portion of the game, Odette's eyes temporarily turn a green-blue color and lipstick.

A good cook and a devoted sister, Odette spends her time cooking and helping out at the Inn from the afternoon to midnight. She cares so much for her sisters, she puts them before herself but it also causes her to feel left out. When playing as Aden she asks him to help her get a gift for Lily which she ends up wearing, believing the player got it for her instead.

Well, if it isn't Aden and Sonja! Do you have a moment to chat?

Odette will ask if the player has any free time. If the player does, the screen will fade to black and they will re-appear at the Inn's Kitchen.

Odette will tell the player that she has been trying to make a new recipe to serve at the inn. Odette will then ask Aden to try something, which upsets Sonja a little because she doesn't get any but Odette re-assures her that she will cook it for her later. Aden will try it but, unlike last time, he will not be as impressed. He describes it as being good but there isn't much of a punch to it and suggests kicking it up a notch. She thanks him for his opinion and says she will try tweaking the recipe a little.

Odette tells him that there's an island with a really unusual building on it. After travelling to the Earth Spirit Shrine, Aden tells Odette that there are monsters there and they can't bring tourists there. She rewards him with the spear ability, "Rapid Spike."

Odette is the middle of the three sisters as well as the first person Aden and Sonja meet. She gives them a tour of the town and gives them the inn's guest house to live in. She is a good cook and does the cooking for the inn. She is also able to speak with the arch dragon, Talynn, and get it to grant wishes at the shrine. Although she's the one most commonly associated with the title of Dragon Priestess, her two sisters are also Dragon Priestess' and are capable of singing Spirit Songs as well. She is later revealed to be the Fire Dragon Priestess.

This is for me? But isn't this awfully rare? I'm going to put it on tonight's menu! Thanks!

Did you make this, Aden? You're so talented.

You want me to taste it? I warn you, I'm a tough judge!

This is for me? Thanks, I accept.
Fall Flounder, Iron, Bronze, Silver, Gold, Platinum, Diamond, Ruby,

Why in the world are you giving me this?

Normally seen sweeping outside or standing outside the Inn, at the Dragon Shrine, or working at the Inn. Sometimes the player can catch her shopping at Gemini Store. 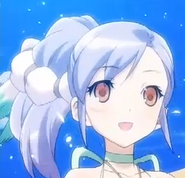 Odette in the opening of Tides of Destiny 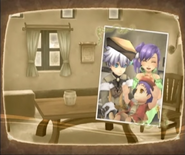