A warrior who makes sure everyone in the island is safe and sound. Responsible and reliable. Often wondering what it means to be a warrior...

She works hard at her job even though monsters are forbidden to enter Fenith island. Often hasty to draw her sword.

Like Maerwen, Mikoto is also a very honor/duty bound kind of person, but in the more traditional sense due to her old-fashioned upbringing. She takes her job seriously, and will do anything to succeed at the task she's given.

To a certain degree, she seems somewhat homesick and tends to see the world relative to similar events/items to her native country. It's one of the reasons she loves sashimi. Her original home was also an island and there were always fresh fish. The Lamp Festival apparently bears significant resemblance to a festival in her home country. If Aden wears a Silver Hairpin, she'll mention the items name in her native language and state that in her hometown women generally wore them.

Mikoto will not wear a bathing suit until the player has her friendship up to a high level.

The characters also will not realize that she is a girl until after the main storyline has been completed.

During Fashion Festival, Mikoto admits she is considering entering but probably won't. Sonja then states that should Mikoto enter and that she'd probably win, hinting that Sonja believes Mikoto is fashionable and/or attractive.

She wears glasses at the masquerade.

Mikoto was born to unnamed parents in an eastern country. She is originally from a clan of Swordsmen, first-born of the family. She was trained in the way of the sword, academics, and etiquette, and completely embraced her studies. However, soon her parents had a baby brother and all the resources which were once used on her were now turned to him. Her tutor and her parents spent less time with Mikoto, and in a jealous rage she left her home, wandering aimlessly until she settled on Fenith Island. She is grateful to have found the island, believing it's made her a better person.

Mikoto first appears as Aden and Sonja try to head to the Dragon Shrine on the island. She will mistake them for an enemy, and attempt to confront them. After clearing their names and stating their business, Mikoto will apologize and go on 'his way'. Sonja initially thought that Mikoto is a male.

When Aden and Sonja separate and a higher relationship is established, a chance to overhear Mikoto talk in the bath house occurs, expressing the joy of finally bathing as a woman.

If both Mikoto and Pandora are present in the bathhouse, an additional conversation between them can be listened to - about Pandora wondering, what would happen if a sorcerer bent on conquering the world would appear on the island.

In one of Mikoto's requests, Aden gets to opportunity to spar with Mikoto. They walk to the beach, with a setting sun/moon in the background. They say a few words before dueling, and the screen fades to black with battle sounds to represent the fight. When the screen returns both remain standing, but Aden admits he lost. Mikoto states that losing in a fair fight is alright; as fighting honorably takes precedence over victory.

That being said, she loves Fenith island and seems content with her new life. Although Mikoto seems a bit of a loner, she appreciates and admire the friendly, loving nature of life on the island, and it only fuels her desire to protect it no matter what. It appears her closest relationship is (ultimately) with Aden, as she doesn't interact as much with other characters on the island. Mikoto will mention talking to Electra at certain points of the game, but the way she phrased it made it appear to be businesslike due to Electra's "governor" status (she asked if there were any improvements that could be done to the island, which Mikoto declined and said all is well.

Mikoto tends to be obsessive about following rules and regulations, but sometimes she's willing to break them if there's no real harm done. During her friend/love events, she befriends a seemingly harmless squirrel (monster), and lets it stay on the island in spite of the rules. They appear to become good friends as he makes additional appearances in the later Friendship/love cut-scenes, effectively proving that Mikoto didn't send him to the Forest of Beginnings. Also, when discussing her past she doesn't appear to mind accidentally going over the allotted time for her patrol schedule (she apparently got carried away talking to Aden), though she does mention it prior to leaving. By her tone, it didn't seem that she left because she needed to finish the patrol, but rather it was another excuse to end the conversation.

Mikoto has a slight crush on Mr. Gerard, noting how remarkably muscular and formidible he is, and pausing in thought after stating this. She quickly dismisses herself after catching herself daydreaming, and resumes her business. This random conversation can occur prior to Mikoto revealing her true gender, one of the earlier hints to the fact she is female.

She thinks that Quinn should be more lady-like, which is strange since Mikoto refers to herself as a male some times.

NOTE: Many of Mikoto's gift responses do not actually refer to how she likes the gift.

In the morning, she can be found just outside the Three Sisters Inn swinging her katana. During summer, Mikoto can be found on the beach. She begins her patrol rounds on the island making her way to the plaza and onward. In late afternoon and early evening, she attends the church. Mikoto goes into bed early.

Mikoto in the opening of Tides of Destiny

Mikoto in her swimsuit 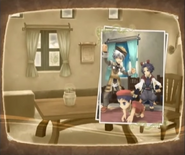