His Child
His Wife

Micah (マイス, Maisu, Mice[1] or Mais[2]) is the protagonist of Rune Factory 3: A Fantasy Harvest Moon.

Like most of the Rune Factory protagonists, he suffers from amnesia and has to figure out why he came to the village.

At the beginning of the game, he will seem to fall into town from the sky in his Wooly form. Micah is saved by Shara, one of the bachelorettes. He unintentionally changes into his human form while in bed (without the the knowledge that he did so) before running out in to the streets and meeting Raven.

Appearing suddenly in the streets as a golden wooly, the unconscious Micah was rescued from the rain by Shara and taken home to be nursed in her bed. He changes into a young man in his sleep, rushes out of the house upon waking and runs into Raven. Shara meets up with them and, between the three of them, they discover that Micah has lost his own memories. Shara then suggests that he live in the Sharance Tree as a farmer.

Micah is initially unable to transform into his wooly form. After finding out about and soon afterward defeating the raccoon that has been stealing food from the town in Priviera Forest ruins, Micah finds an orb which returns a portion of his memory along with the knowledge to use "Transform" Rune, which enables him to transform into a wooly.

After defeating a certain amount of bosses and gaining the orbs, Micah finds out that he was a Guard from an unknown town on a mission to hunt down the five runaway monsters. The strange orbs appeared when Micah came into town.

Thanks, Micah. I know being a guard can be tough work. Well, I want to help. I'm a little nervous, though. ... This whole town is counting on you. That's what I'm nervous about. So many people depending on me... Don't worry, you'll do fine! I can see it in your eyes. You've got more strength and courage than you know. I'm glad you think so. I know so! You've got the markings of a hero, kid! Okay! I'll do my best to protect this town!

I remember... My name is Micah! I guess I didn't forget my real name after all. And I was some sort of guard? I was protecting a town... Where I was a member of the guard...? ...No... I can't remember... I've got to find more orbs and get my memory back!

Viewing your backpack shows you your status screen, it is here you can view how strong your character is with currently used equipment. It will also display changes to your minor and primary stats when selecting an equipment that changes these compared to your current equipment.

Practically anything you do will raise a skill, which in turn will increase stats affected by that skill.

In addition to this farming provides rune sprites and rune orbs (sometimes known as rune spirits and rune spheres), the former increases a random stat by 1-3 (to STR, VIT and INT), the later gives 1 random skill level up instead. 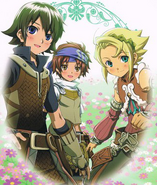 Micah as a wooly