Enigmatic, distant and self-assured, Mei is initially somewhat difficult to approach. One can notice that she does not want many people interacting with her. Despite her hardened exterior, however, she can be a very kind person. Mei is a foreigner to Kardia, and tells Raguna that she has problems remembering foreign names, such as his own. She also tells Raguna that she is much older than him and he should treat her with more respect.

She often warns Raguna of the heavy responsibility that comes with great power, and that he should be careful not to abuse it, suggesting that she herself has suffered the consequences of doing so in the past.

Contrary to what her youthful appearance might suggest, Mei has lived a very long life. In an interview, it was mentioned that she is over 100 years old. Additionally, there are several hints throughout the game that she may be cursed with immortality.

Little is known about Mei's life before she arrived in town. She once used to work in a team under someone's orders, though the reasons for why she is alone now are unclear. Mei began her journey to Kardia to investigate the movements of the Sechs Empire.

During the Spring Festival, Mei states, "I hear there is a custom of giving cookies. That is so weird!" when Mei herself requires a fish to marry her.

Raguna can give her a Lover Snapper above level 80. To accomplish this, the player needs to catch a Lover Snapper in the Misty Bloom Cave and then use the Mystery Shell to trade it back and forth with someone else until it reaches the required level. He can also give Mei up to ten fish on Fishing Day to raise her LP greatly.

If you give Mei a Radish, Potato, Cucumber, Cabbage, Tomato, Corn, Onion, Pumpkin, Eggplant, Carrot, Sweet Potato, Spinach, Green Pepper, or Bamboo Sprout, she will say "It's always nice to get a(n) [item] at the Harvest Festival."

Mei lives at Lady Ann Inn in the 1st room to the left. She also loves to fish, and apparently her homeland was destroyed by the Chimera. 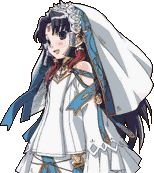