Beating the Second Dungeon. A mysterious masked man. He appears to be important to the story. Aden and Sonja first meet him when they beat the second Boss. He seeks to destroy the world by rekindling the war between the Elder Dragons and the Legendary Golem, and attempts to hinder the Dragon Knight (Aden) and the Dragon Priestess' attempts to stop him. Ultimately, he fails and retreats, stating that Aden is nothing but a pawn of a greater force who is playing him like a puppet.

Very determined to accomplish the goals he has in mind, he becomes a challenge for Aden/Sonja as he goes around to each tower, but for what reason? Usually donning a mask, gauntlets, and a large sword, it isn't until the end of the game does he take off his robes.

He is only seen at the top of the 4 towers during the main story line, and during a majority of the end-game story arc. 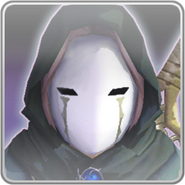