Outgoing girl who's training to become a doctor. However, her treatments don't always go as planned...

Marian is a wild and vivacious young witch who lives with her grandmother, Marjorie, and she wishes to break the stereotype of witches being scary. Marian loves giving people shots and often asks Micah if she can administer one to him. She works in the town's apothecary, but is an amateur in medicine and usually needs her grandmother's help. She is friends with Collette and always tries her experiments on her, much to Collette's dismay.

Marian believes that she isn't a very good witch because she always needs help from her grandmother. In reality, Marian is a very powerful witch, even stronger than Marjorie. The syringe she carries actually suppresses her true power so that it does not get out of control.

Marian has light blue hair tied into braids at the front and pigtails at the back with purple tubes, all topped by a dark purple witch bonnet. Her bangs are curtained and she has purple-red eyes. An orange-yellow ribbon holds her sky blue cape around her neck, and she wears smooth, light brown gloves. She dons a plum-colored dress with a fur-lined petal skirt and a thick, striped, white and lilac bow tied around her waist. Her mauve tights are vertically striped and her boots have wide cuffs with frills attached.

At first, Marian dreams high as she watches how Marjorie can make anyone feel better after giving them medication. Marian used to practice magic in the town plaza, but always destroyed things because her magic is dangerously 'unpredictable,' like her personality. She was given a large syringe by Marjorie to control her magic and prevent her from using any magic while she plays doctor.

Unlock: ❤ 1 | Completed Carmen's request (Fishing!)
Location: Bulletin Board
Objective: Marian had accidentally mixed up prescriptions and handed Collette the wrong medicine, which would apparently make her explode, so she asks Micah to exchange it for the correct one. Give the Special Medicine to Collette, then report back to Marian.
Reward: Formuade and Failed Dish

Looking for patients! Come see me for details.

Unlock: ❤ 2
Location: Bulletin Board
Objective: Marian wants to test her new medicine on a patient, regardless of whether or not they're actually ill, so she asks Micah to bring one back to her. Talk to several of the townspeople and then speak to Marian.
Reward: Piyo Sandals

I'll tell you its effects when you come see me.

Unlock: ❤ 3
Location: Bulletin Board
Objective: Marian has created a supposed "growth serum" and wants to test it on Collette, who has run away from her. Find Collette hiding by the tree in the town plaza.
Reward: Poison Powder x3

Unlock: ❤ 4 | Completed Marjorie's request (Take this).
Location: Mailbox
Objective: Marjorie has confiscated Marian's syringe, so Marian is trying to figure out how to get it back. Micah suggests that she could try to use good magic in front of Marjorie that would prove she's worthy of holding the syringe. First, Marian wants to get materials. Take Marian to Sol Terrano: Star Dunes.
Reward: Antidote Potion x27

Request 5: I give up

Unlock: ❤ 5
Location: Mailbox
Objective: Go to the Witch's Cauldron and talk to Marjorie, who has sent Marian off to collect some ingredients. Then go to Sol Terrano: Bone Bridge. Defeat all the monsters and talk to Marian, who is collapsed on the ground.
Reward: None

Unlock: ❤ 6
Location: Bulletin Board
Objective: Marian has created a new medicine and wants to test it. Talk to at least 5 different people, then head back to the apothecary.
Reward: Magic Ring

Marian has concocted an actually 'effective' medication, which Marjorie herself had checked. She gives Micah a sip of her 'special' tea that makes him helplessly follow her every word, and she orders him to help her administer her new medicine to an ample number of the townspeople. Whoever they talk to, Marian will give them a shot. This is excluding Blaise and Rusk for using tomatoes against her, Gaius and Evelyn for calling them a 'rowdy couple' (which causes Marian to walk away blushing), and Shino for being both too lovely and scary at the same time. Marjorie is also excluded, as is Wells for successfully dodging her 'attack'. After she finishes giving the shots, she realizes they had no effect whatsoever.  Even though it had no effect, this is Marian's first form of administration that doesn't backfire or cause someone to explode. Thus it is categorized as a 'contribution'.

Unlock: ❤ 7
Location: Bulletin Board
Objective: Take Marian to Sharance: Dragon Lake, then head to the town plaza.
Reward: None

It's not a big deal... Something's been bothering me.

Unlock: ❤ 8 | Before unlocking the Unity Festival
Location: Mailbox
Objective: Talk to Marian and go to Oddward: Bamboo Cliffs.
Reward: Formula A x9, Formula B x9, Formula C x9
Note: If the Unity Festival is unlocked before doing this request, it will not appear, but Marian will still be marriageable.

Request 9: I need to talk

Could you come see me if you have the time?

Unlock: ❤ 9
Location: Mailbox
Objective: Go to the Witch's Cauldron and watch the event. Then go to Blaise's Diner 2F and speak to Marian. Give Marian a Withered Grass.
Reward: None

Marian greatly loves and admires her grandmother, Marjorie. While she thinks that Marjorie's healing methods are too old-school, she highly respects her as a witch, believing that she is the best to have ever existed, and Marian doesn't want to disappoint her.

Collette is Marian's close childhood friend. Marian likes how straightforward Collette is: the fact that Collette strives to realize her dreams, no matter how hopeless they might seem, inspires Marian in turn. Apparently, that aspect of Collette also makes her an ideal guinea pig. Although Marian subjects her to many of her 'scientific' experiments, she genuinely cares for Collette's good health and can feel sincerely sorry when she gets hurt because of her failures.

Marian strive through the battlefield casting multiple advance spells at random latency and intensity. She also cast her exploding medicines and spells as if she's still trying to prove herself as a doctor.

Marian cast Dual-Quarter Laser(water magic) by counter quarter angles and quarter angles using her large special syringe(originally). She cast it as well as her gambit conjunction with her Mad-With Technique.

Most of the time, whenever Marian's requests are accepted, she can be found inside the apothecary by the cauldron. 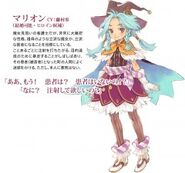 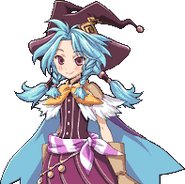 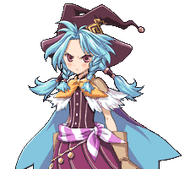 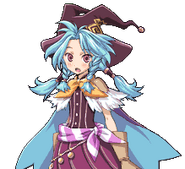 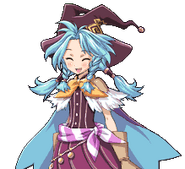 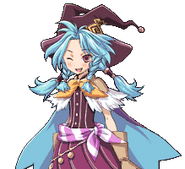 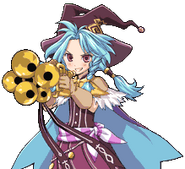 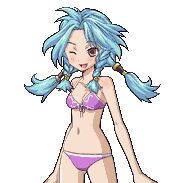 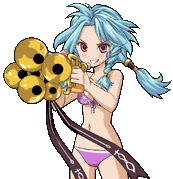 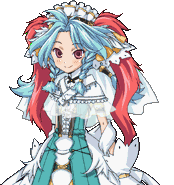