Ganesha's son. Still a child but trains hard to become a great fighter.

"What?! So you know that I will be the future saviour of the world and you've come to nab me?! ...You're actually pretty funny."
―Marco, Rune Factory: Frontier

Marco (マルコ, Marco) is a character in Rune Factory: Frontier.

Marco thinks he's really tough, and often tells Raguna that he is strong enough to take Raguna on. He also tries to go into the dungeons.

Marco has a light complexion with straight blonde hair and blue eyes.

Marco thinks that his mother can't do housework. He thinks his mom feeding him Green Peppers is child abuse. Marco shares a bed with his mother. Marco has a habit of running away from home for a lot for things such as Bell Peppers being in his meals and when his mother oversleeps in the morning when she is supposed to be making him breakfast.

There is a one-time event with Marco during the winter if the first year only.

Marco seems to have a crush on Candy. He thinks that Mist is weird. 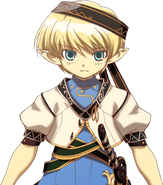 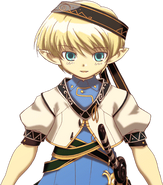 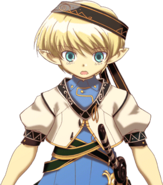 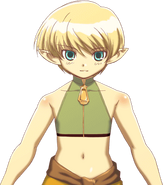