Your lovable child. Full of curiosity and endlessly playful, but also sweet, just like her parents.

Tomoko Kaneda
Luna (ルーナ, Rūna) is a character in Rune Factory 4 and the potential child of the player and their spouse if they choose to have a girl. Her male counterpart is Noel.

Luna is a playful and sweet girl who is full of curiosity.

Luna's appearance will not change regardless of who Lest or Frey marries. She will always have pale skin, light green hair, and matching eyes. Luna wears the same swimsuit and pajamas as Xiao Pai and Amber, with the only difference being the color. The White Stone is only obtained after she is born.

As with all other villagers, it is possible to take Luna out on adventures and speak with her. The player can only have one child. There are a good number of events that Luna will be involved in, including a scene on her birthday.

Once 20 days have gone by, the wife will experience labor pains and eventually give birth. The player will be prompted to name their child and watch a five-year time skip occur. Afterwards, there will be several cut-scenes regarding them and their spouse raising them before the game skips ahead five years.

Upon talking to Luna, she will say that she wants to make her other parent happy. The player will suggest making a gift, in which Luna will decide to make it herself. Luna won't allow her parent to see it, and her other parent will note that she's working on something. The next day, Luna will give a present to both of her parents, along with a letter saying that she loves them.

I Want To Get Stronger!

In the town square, Luna asks if her parent is strong and tries to fight them, but realizes that they are going easy on her. She notices a wooly and tries to fight it to "protect the town", but her parent steps in front of her and says that it's probably just hurt, causing Luna to hit them instead.

The two go and talk to Jones who comes to the same conclusion as the player and inspects it. Luna asks what it means to become strong, and decides that she wants to become strong in the same way her parent is.

A Stroll in the Sky

As with all other villagers, it is possible to take Luna out on adventures and speak with her. The player will only be able to have one child. There are a good number of events that Luna will be involved in, including a scene during her birthday. 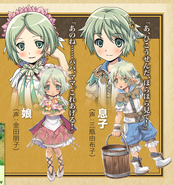 "Papa, you're so cool! Grandpa Vol is cool too!" 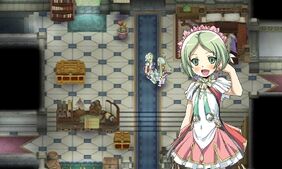 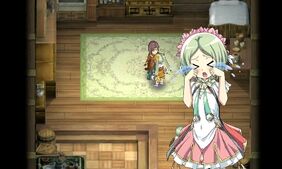