Xiao Pai's mother. Tender and easygoing. Often makes terrible mistakes, but it always works out in the end as fortune smiles upon her.

"Xiao Pai's mother and the owner of the Bell Hotel and bathhouse on the northwest part of Selphia. Her youthful appearance and ditzy, downright forgetful personality has earned her a fanbase among customers."
―Website Description

Lin Fa (リンファ, Rinfa) is a character in Rune Factory 4.

She is Xiao Pai's light-hearted, beautiful, and dotty mother. Along with Xiao Pai, she runs the Bell Hotel in Selphia.

Lin Fa's forgetfulness makes others find her endearing, and if her mix-ups don't actually bring good fortune, then people are still willing to let it slide, much to Xiao Pai's envy.

Lin Fa has a light complexion with slanted brown eyes. Her long gray hair is worn loose with a white pearl accessory, and she wears blue earrings.

Lin Fa is married to her husband, Yan Fan, who appears in town as an unseen NPC during two sub-events. Because Yan Fan travels often, Xiao Pai is closer to her mother than to her father. However, Lin Fa always lets her daughter know when Yan Fan sends them a letter from abroad. She's also prone to teasing Xiao Pai, especially when it comes to the prospect of liking someone.

There are no Requests in Rune Factory 4.

Because Lin Fa's popularity around tourists indirectly contributed to Xiao Pai's partial inferiority complex, she does everything she can to help improve her daughter's self-confidence and popularity. She thinks Xiao Pai is adorable, but seems oblivious to the adoration she herself attracts.

In the Japanese game, she addresses Xiao Pai as "Xiao-chan" and Yan Fan as "Papa-san". 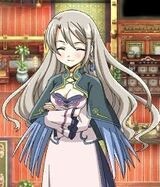 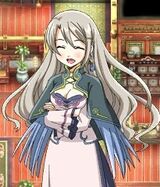 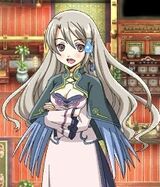