The eldest of the three sisters at the inn. She's a caring and reliable big sister. She's also forgetful and clumsy at times.

Lily is clumsy, forgetful, and loves music. Her favorite pet is a black cat named Boy.

She is very passionate about cooking but is a horrible cook herself. Even though she always strives to improve and cook for Aden she continues to make atrocities until she is finally forbidden to cook by her younger sisters. After that Lily still feels compelled to cook and starts to sneak into the kitchen behind her sisters' backs. Upon them finding out she is scolded and it is stated that bad food aside it is a very unsafe place for a clumsy person to be. Although the sisters are upset that Lily had to do things in secret her sister Odette offers to give Lily cooking lessons. Aden is forced to be her taste-tester again.

Lily resembles her sister Violet, especially her hair color. Like all of her sisters, she has yellow eyes.

Lily is the oldest of three sisters. She helps run the inn during the day; at night she plays the lute and sings there. She and her two sisters are Dragon Priestesses who can sing Spirit Songs. Lily is the Earth Dragon Priestess.

Late in the storyline, Lily, Violet, and Odette run to the Dragon Shrine as a response to an abnormal occurrence. Aden stops them, and Lily asks if he knows about what had happened. Through his reluctance to answer, Lily takes on a sense of comprehension that brings a false smile to her face and orders her sisters away so that she can continue the conversation with Aden. The serious and comprehensive demeanor she holds for the duration of their talk hints that there is some significant depth to her character that is generally left untapped.

Lily asks Aden and Sonja if they have a moment to chat. If they agree, Lily will be dining with them at the inn. Lily is thinking about throwing a welcome party for them. She is thinking of providing a special meal for them. When she is about to go to the kitchen, she suddenly stumbled.

In the kitchen, when she is about to cook, she was suddenly stopped by Odette and Violet. Odette and Violet said that they should handle the cooking while Lily should instead chat with Aden and Sonja. She reluctantly agrees.

Back in the dining, Lily told Aden and Sonja that she is sad that her sisters would not let her cook. Sonja then suggests that Lily should secretly practice cooking. Lily happily agrees. Odette and Violet suddenly arrived with the food.

I Have an Errand for You

Lily says she needs a piece of iron and scrap metal from the blacksmith's so she can make a stand for her lute. After giving this, she thanks Aden and gives him 1000G.

A Sea Chart for an Explorer

Lily gives Aden a sea chart that leads to a temple. After going there, Lily thanks Aden.

Bacchus has a crush on Lily, something he's willing to admit to Aden without hesitation. However, it is unlikely Lily knows, given she never talks of Bacchus and also it is improbable he'd admit his feelings given their age gap. In one of the conversations with Bacchus, he states that he made a "Lily Fan Club", and offers Aden to join. Hence, Lily has a Fan Club.

Is this for me? I don't know exactly what it is, but it looks rare... So, thank you!

Early in the day she can be found cleaning the Three Sisters Inn before heading over to the bath house later in the morning. In the afternoon she will run the inn and then come 6pm she'll begin to play as a bard until midnight. 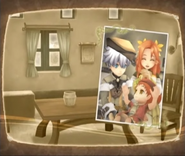