An unbelievably lazy girl who works at the general store. She's usually napping on the job.

Karina is indisputably the laziest girl in town. As the daughter of the general store’s owner, Hazel, she often gets scolded by her mother for falling asleep at the counter instead of serving customers, and she does everything at her own pace for the sake of her own convenience. She constantly procrastinates on work and chores. Due to her indolence, she genuinely lacks the energy to do much of anything and quickly gets fatigued. As such, she hates moving around anymore than she needs to and is always sighing or yawning.

She likes gems and jewelry because they’re pretty, and she finds how they shine and sparkle relaxing. Her reasons for disliking diamonds are just as simple—they remind her of the general store, and they're her mother's favorite gem. For the most part, Karina doesn’t try to think too hard about things, since that costs her more effort than necessary. It’s most likely her laziness in thinking which gives her an open mind: she’s generally accepting of what others might call ‘weird' or 'flaws’, proven by her friendships and her admiration of Evelyn’s eccentric fashion. At the same time, her laziness is why she has such an aversion to her mother’s bull-headedness and rigid outlook, despite Karina herself being just as stubborn.

All of that being said, she can prove to be surprisingly clever and is plenty capable if she feels like putting her mind to it. She actually seems to have somewhat of a knack for business and even finds efficient solutions to problems—even if said solutions aren’t always ideal and are more efficient for her than for anyone else. As Micah gets closer to her, however, she learns to enjoy more things in life and find the motivation to prioritize them over resting, and she becomes more thoughtful of the people around her.

Karina has a warm, light skin tone and droopy, mint green eyes. Her long, wavy, silvery-blue hair is adorned by a blue kerchief with a white stripe bordering the front and lace-like fabric at the sides. A long, red scarf is wrapped around her neck. She wears a cropped, sleeveless jacket over her white tube top, and navy biker shorts under her blue miniskirt, which has an overskirt attached to it with chunky, brown buttons and a red sash around her waist. On her hands are a pair of fingerless gloves, and her mid-calf red socks and blue sandal boots are open-toed.

In her childhood, Karina used to be a very active little girl who always thought about her mother. Hazel was always so busy with the store that she had little time to spend with Karina. To avoid bothering her, Karina chose to keep quiet and tried to stay away from the shop.

Now, Karina loathes having lofty expectations imposed on her, such as those of taking over the general store and confining herself to a life of endless labour. Because of that, she is all too eager to escape. Due to a fallacious notion that modern city folk have the freedom to play around all day and do whatever they please, most of her requests involve trying to move there, investigating urban trends with some questionable sources, and eventually trying to run away there herself. Thanks to Micah, however, she finally stops dreaming of fleeing to the city and grows to like living in the town.

When talked to on her shift in the grocery store while Sofia is there, their dialogue will change:

I need a delivery...

Unlock: ❤ 1
Location: Bulletin Board
Objective: Pick up a Strange Pendant from Sofia and bring it to Karina.
Reward: 10G

Request 2: Come with me

There's somewhere I want to go...

Unlock: ❤ 2
Location: Mailbox
Objective: Karina reveals her plans to go to the city, and she wants to know about the latest fashion trends there. To do that, she believes she needs to talk to Evelyn. Find Evelyn and escort her to Karina.
Reward: None

Request 3: I need to talk

I want you to tell me something.

I'll give you more details when you come see me.

Unlock: ❤ 4
Location: Mailbox
Objective: Escort Karina to Privera: The Eye. On the way, show her how to mine ore and give her an Apple.
Reward: 100G

Request 5: I want a cold

I really want something. Could you come see me?

Unlock: ❤ 5
Location: Mailbox
Objective: Take Karina to Witch's Cauldron to find out how to catch a cold. Give Marian a Yellow Grass, Purple Grass, Grape, and Rice. Micah and Karina will both catch a cold.
Reward: Leek Seed x9 and Cold Medicine

Unlock: ❤ 6
Location: Mailbox
Objective: Karina wants to sell some unusual products at the store. Take her to the Diamond General Store to get permission from Hazel. Pick up a Spare Scrap Metal from Raven for Karina to sell. Next, promote the shop's new line by talking to the townspeople until Micah decides he's done enough. Return to the store during the shop's hours to see how Karina's venture turned out.
Reward: Greenifier x3

Unlock: ❤ 7 | Completed Hazel's request (Town helper 2)
Location: Mailbox
Objective: Karina has been given an extensive list of tasks to do by her mother, and she asks Micah for his help in completing them. Take her to the following locations within 1 in-game hour:
Reward: Brand Glasses

Unlock: ❤ 8
Location: Mailbox
Objective: Upon arriving at the general store, Micah discovers that Hazel has closed the shop because Karina has run away from home, leaving behind only a letter. To find her and bring her back home, talk to Raven and Sofia, then go to Oddward Valley, let Karina stay at Micah's place for the night, and take the rest of the day off.
Reward: None

Request 9: I have an errand

Unlock: ❤ 9
Location: Mailbox
Objective: Go to Privera Forest with Karina to have an honest talk with one another.
Reward: None, or a step forward in Micah and Karina's relationship.

Karina constantly bickers with her mother, Hazel. Any attempt at civil conversation with each other immediately breaks down into an argument: Hazel chides Karina for her bad sleeping habits and poor customer service, while Karina complains about what an uptight workaholic and overbearing mother Hazel can be. Karina doesn’t believe that her mother sincerely cares for her or would miss her if she left—though, to be fair, Hazel’s words and behaviour don’t really help to prove her wrong. Karina recalls feeling lonely as a young girl because her mother would have to look after the shop instead of her (though she realizes in hindsight that her mother had always been there for her whenever she was in trouble), and she feels guilty that Hazel blames herself for how Karina is no longer as energetic as she used to be. Neither is good at taking the initiative when it comes to giving affection, so they both struggle to be honest with each other and vehemently deny sharing any similarities. At the end of the day, both of them do love and care for each other—they’re just very bad at showing it.

Raven and Sofia are Karina’s best friends in the town, always hanging out together during festivals. They often mention her in conversations and vice-versa. Although Raven and Sofia disapprove of Karina’s abysmal work ethic, the trio accept each other’s individual eccentricities, seeing them not as flaws, but simply as part of who they are, and, on the whole, respect their personal boundaries. If she’s bored, Karina enjoys finding opportunities to tease them. She generally won’t pry much into their troubles and, more often than not, can’t actually be bothered to help them even when she is trying to help them. Nonetheless, she genuinely cares for their happiness, and both of them are special friends to her.

She gets along well with Evelyn, seeing her (mistakenly) as an inspirational representative of city life, and admires her unique fashion sense.

Karina wakes up at approximately 6:50AM. She can normally be found at the farm at around 5PM to collect the shipment. 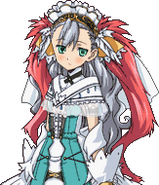 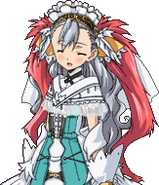