Rune Factory: A Fantasy Harvest Moon takes place in Kardia. «The world outside of Rune Factory's Kardia is largely at peace. The conflict arises there only because it's at the border between two nations.» «All games so far take place in the Norad Kingdom.» (World of Rune Factory : World.). Players are allowed to enter any shops except Camus Farm after getting at least 3 FP.

Sabrina runs the Spear Fisher shop down on the beach. At the beginning of the game she'll give you a free fishing pole if you walk to the end of the boat dock. Sabrina is Nicholas' mother, and was once married to Neumann before she moved to Kardia. A side quest may involve Raguna into helping Nicholas to acknowledge who is his father, and may offer to the broken couple a reconciliation. See : Rekindling Old Flames, or the stoller Chalice Quest

The Kardia Library is run by Russell. Russell's library holds the books printed with spells, which you'll find on the back wall of the building. He also sells books used for crafting if you ask him. He adopted the high elf child Cecilia  when she was orphaned by the previous war.

The Kardia's Library is run by Russell. Russell's library holds the books printed with spells, which you'll find on the back wall of the building. He also sells books used for crafting if you ask him. Tori could be found almost everyday inside the library, on the first floor during business hours.

If you're ever ill, visit Edward anytime at his clinic, or wandering around town during festival days. He has several types of potions for sale, can cure status effects, and even manufacture medicine for your Empty Bottles. Lara works here as his assistant.

If you're ever ill, visit Edward at his clinic. He has several types of potions for sale, can cure status effects, and even manufacture medicine for your Empty Bottles. Lara works here as his assistant.

The seed shop is run by Jean and his daughter Rosetta. She tends to boss her father around the store, but he just smiles and complies with her requests. Besides selling seeds he will have various low level accessories for sale. Since the various caves around the village don't change season, you can buy all of the seeds available all year long. Whenever if you chose rivalry with Lukas, about Rosetta's hand, Raguna could try to solve the mystery about The White Stone Quest, and then he would be able to propose to Rosetta.

Note: *Seeds are sold after the main story is completed. (Clear Greed Cave).

Emmett is the friendly bartender of Spring Rabbit, the town's tavern. He likes to help out anyone he can, and he sells ingredients you can use for cooking. His dream is to be able to taste the famous Rollabouti Wine. As a side quest, Raguna could help him accomplish his dream.

There's a small inn in the village run by Lady Ann. Her two children, Tori and Zavier live upstairs with her. She attempts to get her son to help her with the business but he's never present when there's work to be done.

The only blacksmith in the village is Leo; a grouchy old man who is revered for his talents. He will upgrade your basic set of tools but only a few times. If you want to surpass Leo's skill then you will have to upgrade your house and remodel the tools yourself. Throughout battle and history, Raguna may help Leo accomplish his dream. His dream is to craft a sword using a Grimoire Scale. 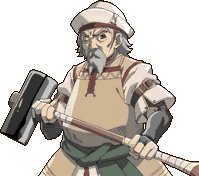 This public bath's house is owned by a enthusiastic and lovely girl, Melody. Sharron describe her as her best friend.

Next to Melody's hot springs you'll find Neumann's Farm. His shop sells fodder and seasonal fruit you can't grow on your own farm. Felicity likes to help out every now and then. He was once married to Sabrina and followed her to Kardia. A side quest may involve Raguna into helping Nicholas to acknowledge who is his father, and may offer to the broken couple a reconciliation. When you feel ready, ask Neumann to expand your house. He will be glad to do it as fast as in 10 days, as soon as you lend him 200,000 G and 2,000 Lumber pieces.

Camus manages his farm shop in the middle of Kardia Village. He only sells Feed and S. Milk, but he also will manufacture the monsters huts for your farm. If you pay him 1,000 G and have 100 pieces of Wood, Camus will make a new hut instantly appear. Edward is Camus' father, and the doctor is always trying to convince his son that the his dreams of the big city aren't going to pan out. Players can build up to 7 monster's hut. After the 8th build, it will build basement instantly instead of new monster hut.

The church is run by the priest, Wesley. He will stay inside of the church most of the time, except for holidays and friday afternoons. Nicholas enjoys pulling pranks on him, but kind Wesley doesn't mind at all. Template:Spoiler A side quest may involve Raguna's held in the secret, about the possible location of a missing holy book.

Ivan is a traveling merchant who visits Kardia every week on Holiday. Every week, he brings a different set of items. Ivan sells many home appliances and other recreational items. It is possible that Raguna is Ivan's long-lost brother, at least Ivan's peddling in hopes of finding him. It always open during Festivals. 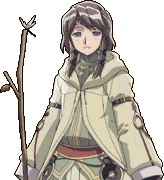 Note: Up-keep in color are unavailable until you have completed a house' expansion

The large mansion in the northeast corner of Kardia village is owned by Jasper De Sainte-Coquille. Jasper is a world renowned gourmet and is an expert at judging cooking contests. He volunteered to manage all of the festivals that take place in the village. He also pampers his daughter Bianca, and lets her have anything she wants. Tabatha, a kind and polite "lady" could be seen inside this manor, working as a maid.