James plays the part of an overprotective older brother, although he means well.

James resembles his sister Elena. They both have blonde hair and blue eyes.

James lives at the blacksmith, but works as a merchant. He exports goods from the island and imports products from other islands and faraway lands.

James will ask if you have time to chat. Accept his offer, and you will walk with him to the Church Plaza. James asks how Aden and Sonja are settling in. Sonja replies that she's very happy, and that the people are all very kind. James will then say that they can ask him anything if they need some help, which Aden says is very much appreciated. Sonja then asks James about his job. He explains that he imports and exports goods, but doesn't feel that his work is that big of a deal. He admires Elena a lot more, because she creates things. Upon speaking Elena's name, James starts to go into a ramble talking about his sister.

If the player accepts James' offer to chat, Aden/Sonja will appear with James at the Blacksmith's. James finds the place messy and scolds Elena for not cleaning up the mess. Elena protests and tells James to get his girlfriend to do it if it bothers him so much. Sonja, being curious, asks James on how his girlfriend is like and James tells them. James snaps back into reality and apologises to Aden/Sonja for leaving them talking without getting them tea and gets tea for them.

If you accept James' offer to chat, Aden/Sonja will appear with James at the Inn. James has bought Aden/Sonja a meal as his treat. Aden asks what the occasion is, and James answers that it's "not that complicated," he's merely trying to understand how things work on the island. As Aden eats, James turns his thoughts to Elena. James' girlfriend suggested that Elena sell her Golems for profit, which Elena wasn't happy about. James wonders if he's spending enough time with Elena now that he has to split his attention between her and his girlfriend, and starts to ramble about his sister (again).

Aden/Sonja will appear with James at the beach. James seems very upset, and says that he needs to confront Aden about something before he can start a new business deal, or else he won't be able to concentrate. Sonja and Aden are concerned, so they let James speak his mind. James is concerned about Aden's relationship with Elena, as Elena has been supposedly talking a lot about Aden lately. Sonja diffuses the situation by explaining that Elena is interested in Ymir, not Aden. James is relieved, and says he can now concentrate on his trading.

I Want to Try Something

James asks for 4 pieces of iron. He rewards Aden with 200G.

James is Elena's older brother and often worries (a little bit too much) about her. He and his sister often argue, but James still seemingly worships the ground that she walks on. He is very proud of Elena for her work and high skill level.

Although James is an eligible bachelor, in the beginning of the game, he would be dating a woman from another island.

James is a busy man, and tends to be out on business on Mondays and Wednesdays. On Thursdays and holidays, James will set up shop in the Church Plaza and sell his wares. He will also teach the player about the importance of haggling, as well as how it is to make the most of your money. Home upgrades can be purchased from James' stall. 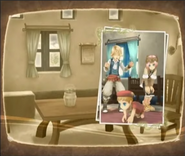