A detective who's always looking for new cases. It's unknown whether she manages to solve any, though. Enjoys afternoon tea -- it looks very detective-y and dignified to sip afternoon tea, right?

"It's her, The Great Detective! ...or so she claims. Illuminata runs the flower shop alongside Amber, whom she refers to as her "trusty assistant". She is always on the hunt for a new mystery even in places where there's nothing to be found, which often leads to more trouble than it's worth."
―Website Description

Even though she formally runs "Carnation Flowers" in Selphia, she is also a self-proclaimed detective. She usually patrols the town in search of incidents or mysterious happenings that she herself can declare an incident or mystery of some sort. She makes various references to fictional detectives and, at one point, has called the protagonist "Watson". She regularly takes guesses on Amber's riddles during some of their morning conversations. Her catchphrase is "The culprit?! This is an incident!", which reflects her hyperactive personality as both a florist and a self-proclaimed "detective".

Illuminata tends to get far ahead of herself during her investigations, one example being in one town sub-event where she believed that there was a case to be investigated in Forte and Kiel's residence. Illuminata hid inside their house and waited for her chance to surround Forte as soon as she entered her home. Of course, this only earned Illuminata a painful strike from the flat of Forte's blade. Illuminata has also spied on one of the bachelors' sleepovers during a card game to determine which girl they like. Of course, Leon was fully aware of her presence and he purposely admitted to "liking" Illuminata in front of the other bachelors, to merely tease her.

As the person who adopted Amber, Illuminata is very motherly towards her. This maternal trait to her personality has also brought up her strict side, as she had slapped Amber during a town sub-event for eating her memento flower at Selphia Lake. It earned her (Illuminata) a scolding from Xiao Pai before she eventually apologized to Amber. She is also very serious when it comes to giving relationship advice, as shown in Clorica's main sub-event.

Illuminata can often be self-conscious about her weight, worrying often over what to eat for dessert.

Illuminata has slightly tanned skin and cyan eyes. Her red hair is tied in braids and it has wavy/curly bangs on the left. However, as an elf, she is much older than she looks.

Amber will move into Illuminata's flower shop after her monster form is defeated in Yokmir Forest.

Illuminata isn't a marriage candidate and the question as to why has led to some speculation based on in-game evidence. Illuminata is known to be one of the oldest villagers in Selphia as she is close friends with somebody as old as Volkanon. Furthermore, in one of her daily dialogues, if the player chooses to ask if she's alone, Illuminata reacts angrily and she apologizes for being single. Given her knowledge on relationships and how she has coached Clorica on her commitment to Lest in said bachelorette's main sub-event, it is possible that she may have had a lover in the past or perhaps an awful relationship.

Florist by Day, Sleuth by Night!

Thoughts Lost in the Lake

A Porco and An Elf

Illuminata can be seen as somewhat of an older sister to the rest of the bachelorettes. She and Clorica are known to chat from time to time inside of her flower shop. Illuminata appears to be a good friend to Margaret, acting as a fellow elf who is looking out for her own kind. However, it is heavily implied that Illuminata finds Forte scary when angered, as she tells the protagonist with an unsure expression on her face that they simply cannot anger said knight when talking about Kiel. 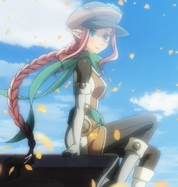