"I got a scar over my right eye fighting a dragon in my youth...A warrior? Look at how I'm dressed. I'm obviously a priest!"
―Gordon[src]

Gordon (ゴードン, Gordon) is Cammy and Dorothy's father. In his youth, he used to be a warrior, battling monsters and such. Today, he is Alvarna's Priest.

Though he swears a life of peace now, he hints at a more aggressive youth. He is enthusiastic about feats of athleticism, and often boasts of the battles he won in his youth. It is likely that his influence is to blame for his daughter Cammy's rambunctious, adventure-loving personality.

However, he takes his priesthood seriously, abstaining from violence and reminding the villagers to be grateful for the Earth's blessings. He also has a hidden talent for making rings, brooches, and other types of jewelery.

Gordon's vestments resemble those of a Catholic Bishop, including a cross hanging from his neck and a tall cap. The main colors are purple, white, and gold, and he has a short, ruffled cape covering his shoulders. He has thick, grey hair and a beard, but no moustache. He has a scar over his right eye.

Gordon is Cammy's father, and doesn't seem bothered by her fascination with adventure. He worries over his other daughter, Dorothy, and tries to be a source of support to help her overcome her fear and learn to open up to others. It's not clear if Gordon's wife is living in another village, if she has died, or if Gordon's daughters were born outside of marriage.

He, Douglas, and Natalie are long-time friends; you can see them drinking together on festivals in the clinic. Now that he's older, he and Douglas still have some sort of a rivalry in which they argue about who is stronger or manlier.

As the village priest, Gordon's role doesn't really change over the course of the story. In both generations, he remains the watchful protector of Alvarna's spiritual health, as well as the protector of his anxious daughter Dorothy.

Gordon is moderately easy to give gifts to. Proof of Warrior can be gotten from Goblins in Messhina Valley, which are easy to defeat, and he also likes Fleece, which can be obtained easily from tamed Woolies.

There is a glitch during the first generation where Gordan will indicate that it is not his birthday when given an Amethyst Ring, no matter what day he is given it on. It is fixed in the second generation. 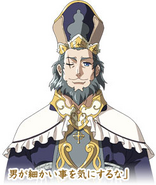