"There's no need for such formality. Relax—that's an order."
―Gideon

The Warden and founder of SEED. Unified countless peacekeeping agencies to make the organization what it is today. Refuses to tolerate evil in any shape or form.

"We must continue to push for justice in Seed." これからもSeedの正義のために力を貸してはしい。 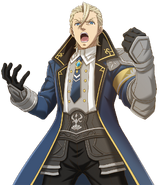