Fiersome () is one of the Elder Dragons, the divine dragon of fire in this case, and thus the final boss of Rune Factory 2: A Fantasy Harvest Moon.

Since he's one of the Elder Dragons, he is capable of committing acts of mass destruction. Fiersome is also the final antagonist of the game and can be only seen in the second generation of the game.

The Elder Dragon is capable of dealing strong attacks against you so having a high level is recommended to face the brunt of his power.

As can be seen through its name, Fiersome will use Fire Elemental attacks against you, so you can counter his elemental weakness with an arsenal of water weaponry and spells.

"Fiersome is the god of fire and destruction. It will lay waste to the world."
―Barrett[src]

Fiersome is the Dragon God of Fire and has the power to bring the world into an Apocalypse.

One thousand years ago, the Earthmates were able to use powerful magic to seal Fiersome away, However, the seal is now on the verge of breaking. The signs of the earthquake in the first generation is because of Fiersome rampaging beneath the ground and the meaning of this is the seal is trying to break out.

This is why Kyle left his family. Kyle tried to unite with Fiersome to stop Fiersome because the seal is on the verge of breaking.

When Fiersome is defeated, the world will now be safe for another 1,000 years.

"All of those earthquakes that we had are a sign that the seal is weakening."
―Barrett[src]

The old Earthmates tried to seal Fiersome away and built the city of Alvarna for that very purpose. But the 1,000 years has now passed so Fiersome's Seal has weakened. So Fiersome's rampage beneath the ground will be the cause of the earthquakes.

If the Seal was finally broken, Fiersome will lay waste to the world. Then the Dragon God of earth, Terrable, will be born anew and will signal the rebirth of the planet. This will make all of the living things in the past die.

You will have to fight the Elder Dragon Fiersome. The battle takes place in the Palermo Shrine, which will be the final dungeon with many powerful monsters and a puzzle to reach Fiersome.

Unfortunately, you can't bring any of your monsters into battle as they will be automatically send to your barn when you try to walk in the Palermo Shrine - Stairway to End if you bring any monsters.

You will also first go to 4 Seasons Hallway and complete some quest to obtain the following orbs.

After having all orbs, you can now go further and battle Fiersome. The name of the Place is "Palermo Shrine - Scorching Altar."

You will first need Dragon Break to give you a huge advantage against the fire god. By completing all the stone tablets, you can speak to Barrett and get it from the Library.

At the very start of the battle, you need immediately use the Dragon Break and it does not need to hit Fiersome. The Dragon Break will help make your power surge to completely strengthen your attacks to damage the Elder Dragon greatly. If not used, your attacks will be naturally weak against the deity.

You also need some dodging skills because Fiersome will also try many ranged attacks in random places, and timing is a big factor with your offensive.

Do the same thing without getting yourself hurt and you can now defeat Fiersome. 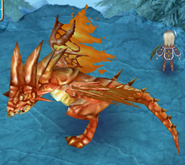 Retrieved from "https://therunefactory.fandom.com/wiki/Fiersome?oldid=76062"
Community content is available under CC-BY-SA unless otherwise noted.