There are nine festivals that happen every year regardless of where you are in the storyline every single year. Here is the list of annual festivals:

1st of Spring, starting  on your 2nd year

On the 1st of Spring, return to the Town Square to see Rita and Turner standing near a banner and festival area. Approach the diamond shape for an action arrow to choose to place your New Mochi there to be smashed. On smashing, you'll get a few Mochi. Talk to Uzuki near the singing rock in the center of the square to have your fortune told. Otherwise, not much going on today. 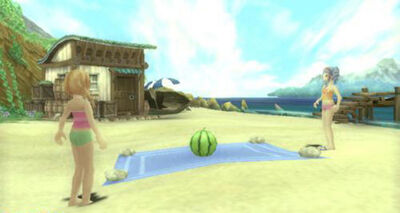 At 10 AM you can talk to Rosetta at the beach to begin the festival (You should change into your trunks). Rosetta will tell Raguna that she recently purchased a watermelon. If Raguna participates 4 bachelorettes will participate, one will be lying and the others won't.

Raguna will be blindfolded. 1 of the 4 girls will be lying about where to go. Your job is to listen to the girls and move to where the girls say to go smash the watermelon with your hammer. If you succeed there will be a friendship bonus with all bachelorettes participating. If you have a certain girl in mind and shes not participating save before and turn off your Wii if she doesn't participate, then reload and try until she does. 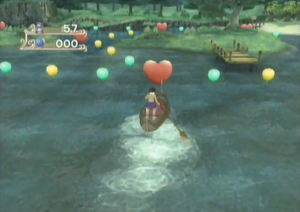 Talk to Stella up at Lake Poli at about 10 AM. Ignore the talk about the girls (you won't be able to bring a girl along until they have 8 love points).

The goal is to go around the lake and collect as many balloons as you can. The heart balloons are worth more and give you a speed boost, but the boat is hard to control while you have the boost. The balloons regenerate, so it's a good idea to go in laps around the islands for max points.

Just wear a pumpkin mask. Otherwise nothing else happens. Except for Mist having the turnip mask.

Villagers pass out Veggies to you, and you can give them back. The number of given veggies differs every year, but it may be connected with the friendship points of the villagers* as they increase.

Meet Stella in the town square. You and all of the treasure hunters are searching for the golden turnip. There are also carrots and regular turnips hidden all over the town. There are 8 hiding places:

Whenever Raguna finds an item, he will celebrate finding the Golden turnip, but 7 times out of 8, he will be disappointed.

Sometimes you will hear your opponents call that they've found the golden turnip. Ignore them and keep looking. They're all lying.

Meet Kanno in the town square. He will join you into the contest with Mist and two other random characters. It is themed like a TV game show.

Kanno will ask you 10 seemingly random questions about townspeople and the town itself. There are three possible answers for each questions. To choose your answer, stand in the box marked with the number answer. After time runs out, Mist will go to your square if you're alone or will leave your square if you're crowding her.

The last question is Kanno's Super Gramps question, where the rules are changed randomly.

The prize is the fruit that was used to tally score, and if you don't win first, you get a participation prize. If there is a tie, the prize goes to a random audience member.

Nothing really happens. Everybody meets in the town square and brings an ingredient for the hotpot. It doesn't matter what you bring to put in. The only thing that changes is what the townsfolk say. No prize.

Talk to Rita in the Town Square for a New Mochi to break the following day. If you want to see the sunrise, as the villagers mention, just stay out late. It gets light in-game around 3 am.

There are three festivals that have special requirements before they can be participated in. Some only happen after the second year begins, but one is only available after the storyline is completed.

Bianca hosts this festival only if you have unlocked the event that keeps Bianca and Tabatha in town, and starts it on the second year. The game centers mostly around her.

Meet Bianca at the Town Square to play. The object of the game is to bring Bianca the dish she requests from the choices provided, within the time limit. While there are other townspeople participating, they don't actually do anything during the game and their scores are random. You'll get five foods for participating, category depending on where you place.

The first year, you can get flowers from Eunice and Stella on this day. In following years, when it becomes an official village festival, you give flowers to "those you are indebted to."

The number of flowers you receive is possibly based on your interactions* with the villagers in the past, particularly your help in their individual storylines.

30th of Autumn, after completion of the storyline*

A day that Whale Island blocks the sun, as its Runeys absorb the sun's warmth to prepare for winter. A reflective festival, no games, prizes, or giveaways, though Melody says it's a day to give hot milk.