After defeating the four bosses (Raccoon, Skelefang, Crimsone and Amaranthine, Death Wall), and after completing the bouquet for the Univir, the Unity Festival will be held. Though there is no mini game, there will be an event where the protagonist escorts Kuruna at the beginning of the first Unity Festival. The protagonist then introduces Kuruna to the Villagers and leaves her company.

During the first Unity Festival, all the Villagers and Settlement members will remark on how they never expected the other race's company to be so pleasant.

In the festivals after, the Villagers and Settlement members will come to reflect on how much their lives have changed since they united.

Though this isn't an official festival, the townspeople will comment on it. Additionally, villagers which are around level 6 or 7 in friendship or love will give Micah an item. Micah's birthday is based on the birth date listed in your Nintendo DS.

If your birthday is in December to February, your in-game birthday will be in Winter.

If your birthday is in March to May, your in-game birthday will be in Spring.

If your birthday is in June to August, your in-game birthday will be in Summer.

If your birthday is in September to November, your in-game birthday will be in Fall.

Your day of birth remains the same.

Although this festival takes place on Spring 1st, this event will not occur until the 2nd year of the game. There is really not much to do for this event but talk with the village elders, Wells, Marjorie, Blaise, Sherman, Ondorus, Hazel, and Shino, and they will give Micah different, but large, amounts of money.

Micah will be asked to play the part of a demon and other characters will throw beans of different colors (as well as failed dishes) at you. The objective is to be hit by as many beans as possible while dodging the failed dishes. Even if you fail to win, you will be given three cooking recipe breads for participating in the contest. A score of around 6000 is needed to win. Winning this will reward you with nine cooking breads and nine bags of onion seed.

Catch the Most Fish Contest

In this contest, you must catch more fish than anyone else in the village. Squid will count towards your total. You must talk to Wells after 9am to start tracking your fish, and must talk to him between 5PM and 6PM to finish or you will be disqualified. Around eighteen will be needed to win and winning the contest will get you nine Cooking Breads.

Hint: The water outside of the Inn is an easy spot, as the fish respawn fairly quickly and there isn't much space for the fish to escape. Charging the Fishing Pole helps. 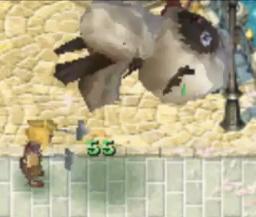 In this minigame, you must fight a giant Wooly in a given time limit. Your task is to get as high of a score as possible before time runs out. You are given a choice of any one of the possible weapons in the game to use. Each weapon has a different point weight to balance out different styles, i.e. slower weapons have a higher point per hit ratio and faster weapons have a lower point per hit ratio. You can expect to win with a score around 6000. Winning the event earns you a trophy and nine recipe breads. And don't forget to pick up the wool after you trim it.

To enter this contest, submit a Spring-season vegetable to Wells. He can be found at the Town Square after 9 AM. The main criteria for winning are the length of the growing period (i.e. how long it takes to grow the vegetable) and its level. First prize wins nine recipe breads and a trophy, while second place gets three recipe breads. Note that vegetables grown in dungeons will not be accepted. Any vegetable entered will be returned after the contest.

A vegetable with a two-day growing period will win if it is level 5 or above. Vegetables with a longer growing period do not have to be of as high of a level. Entries can be prepared in advance. Fertilizer (such as Formula A) can be used to shorten growth time.

The spring vegetables are:

To celebrate the first day of summer, the townsfolk wear bathing suits while at the beach by the lake.  This continues all summer.  Not all townsfolk (namely Gaius) wear swimsuits.

A contest in which you can compete to catch the largest fish from anywhere in town or the dungeons. Generally, a fish 60 cm or larger will suffice for first place.

Hint: Lover Snappers, Skipjack, or Salmon can be caught in the pool on the top right corner of Windy Caves in Oddward (Fall Dungeon). These fish have a minimum length of 100 cm. 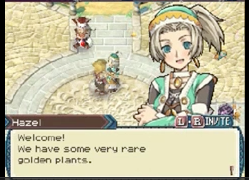 In this festival, every person living in Sharance will sell merchandise or offer a trade for other items. There are some great items that can be found at great prices in this event, as well as some rare item.

To enter this contest, submit a vegetable to Wells when he is standing in the Town Square.  First prize wins nine recipe breads and a trophy, while second place gets three recipe breads.

The summer vegetables are:

This is a mini game event. Speak to Wells to participate. In this event, you play a game to see who can eat the most food. Different kinds of food are worth different amounts of points: 250 points for eating vegetables and 700 points for eating a recipe dish. There are are also Failed Dishes that subtract 100 points. You will need a range of 5000 to 6000 points in order to win this mini game. If you win, you will get a trophy and nine recipe breads.

Catch the Most Squid Contest

This is a fishing event. This contest is based on how many squid you can catch. Once you're done, submit your results to Wells between 5PM and 6PM. You need to catch more than four squid in order to win this event, though you can win 3rd place with a minimum of three squid. If you win, you will receive 9 recipes, bread and a trophy.

Hint: A good place to catch squid is on the water outside the Inn.

A minigame event. Four balls are laid out on the ground for you to pick up and throw at the large turnips that will float towards you. White turnips are the most common. Pink turnips are faster and worth more points, while gold turnips are the fastest but float across the back of the screen, making them the hardest to hit. Hitting multiple turnips will get you combo points, but this is difficult to achieve until the turnips begin to float towards you more rapidly.

Hint: When the turnips start coming too quickly for you to hit, start hitting them from the side.

To enter the Fall Crop Festival, give a vegetable to Wells while he is standing in the Town Square.  First prize wins nine recipe breads and a trophy, while second place gets three recipe breads.

The fall vegetables are:

Catch a Variety of Fish Contest

Note: Like the other fishing contests (e.g.: Catch the most Squid), you cannot fish ahead of time; the game counts the number of different species you catch after signing up for the contest.

As with the other seasonal vegetable contests, enter by submitting a vegetable to Wells.  First prize wins nine recipe breads and a trophy, while second place gets three recipe breads.

The winter vegetables are:

There is not much to do, but all the villagers will be gathered around town as with a normal festival. At midnight, they will wish you a happy New Year. There are also fireworks sounds at midnight, though they cannot be seen.