The first day of the new year will be not unlike a normal day. However, all stores will be closed and the villagers will be found in their festival spots. There are no competitions and no special events. Talking to villagers, however, will still be rewarded with a FP/LP boost. 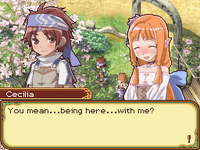 
At The Flower Festival, Kyle or his child can ask any of the bachelorettes or bachelors on a date to look at the cherry blossoms. To go on the date, the protagonist must talk to the girl or bachelor and say if they would like to look at the Cherry Blossoms. Unless they have already asked three people, the bachelor(ette) will accept and the protagonist can go to Cherry Blossom Square to start the date.

On the 25th of Spring you can participate in the Eating Contest. Like all the other contests, Herman will host. Like in most festivals, Herman explains, "That special someone's opinion of you will no doubt go up! What's more, the winner will receive a faaaabulous prize!" before you are given the choice to enter. In the first generation you will be up against Gordon and Douglas, who seem to have a friendly competition going on. They tell the protagonist that it's pointless to participate because there has no chance of winning. To win, you must mash the A button as soon as Herman says "STAAAAAAAAAAAAAAART!". Every time you press A, one bite will be taken.

There are 3 places you can possible take

Participation - (The game says you get the Mental Supplement, but you actually get corn.)

In the first generation, Douglas will always beat Gordon.

Unlike Rune Factory 3, RF 4, RF:ToD and RF:Frontier, the first day of summer will not be a normal day. No one will dress in their swimsuits, seeing as Alvarna does not have a beach. However, all stores will be closed and the villagers will be found in their festival spots. Talking to villagers, however, will still be rewarded with a FP/LP boost.

The objective of this festival is to tame a specified monster, which Herman will announce after the protagonist enters the contest. Max and Jake are will be the protagonist's opponents. The timer will stop when the monster has been tamed.

Note: In order to participate, a Pet Glove must be in your inventory. You can obtain a Pet Glove by completing Cecilia's first request.

During the dance festival, it's customary for couples to dance together. If any bachelor or bachelorette has five hearts or more, it is possible for the protagonist to ask them to dance. They can only ask one person per festival. After asking them, the protagonist will appear at the plaza where they will dance together.

This objective of this festival is to see who can catch the largest fish. Speak to Herman to enter; he will announce which fish you need to catch (which appears to be completely random). Your opponents will be Barrett and Dorothy. There is no time limit, though you must speak to Herman before the festival is over. It is recommended that you already have some fishing experience, so you know where to go to catch the selected fish. SARDINE seems to be often requested and you can fish it in Blessia Island - Port (Try to charge your pole to the purple light to get bigger fish). To win the contest, you need a 18 cm sardine in order to get first place. The prize for winning is FORMULA C.

In the second generation, the Fishing Contest changed to Big Cook-Off. Herman will announce the dish which is SEAFOOD PIZZA. If you buy it from Yue, you will get honorable mention prize: FUR SLEEPING BAG.

This is considered one of the hardest festivals; the objective is to venture to a monster infested place and search for an item. Herman will be explaining this event. Jake and Tanya will be your opponents. Additionally, you will get a certain hint. For example: "Look at the most north-eastern point of Blessia Island" where you will need to find the item which is invisible to the naked eye requires a lot of time and effort to find. Like other festivals, you will need to find this item as soon as possible. The timer will start when Herman shouts "Go" and will stop the moment you find the item. This means you can walk back at your own pace.

This festival is for simply thanking the earth for its blessings. All the villagers are thankful for the crops they eat, and therefore have a festival to honor the earth. There is no challenge or such; you can just treat this like a normal day. However, if you talk to villagers today, you will still be able to get the FP/LP bonus that is exclusive to festivals.

The last day of the year will be not unlike a normal day, however, all stores will be closed and the villagers will be found in their festival spots. There are no competitions and no special events. Talking to villagers, however, will still be rewarded with a FP/LP boost.