Decided by the player

"Inside me is a list of all the important requests everyone has made. Because let's face it, everyone needs help sometimes. But you can't solve all of them at once. No, no! So I'll help you solve them one by one. You got that?"
―Eliza, Rune Factory 4.

They are the Request Box located in Selphia's Town Square. It is made apparent that only Lest, Frey, Dolce and Pico can hear their voice, although it is unknown if this ability is exclusive to Earthmates. They imply protagonist that the reason they can speak must have been that they were made using materials from the Sharance Tree, indicating that the tree possesses enough earth power to animate them into a sentient existence. The player can decide whether Eliza is male or female, as they ask the player after a certain amount of quests have been completed.

Eliza is a brown mailbox wearing a red feathered hat Their face is split into two horizontally, with the cut in between supposedly meant to represent a mouth. Their top half has two holes, likely meant to be eyes. They are situated on a blue post and are wearing a single brown boot.

Eliza was made from a large tree, suggested to be the Sharance Tree.

Eliza does not have many relationships with the people of Selphia, as most of them aside from the player and Dolce do not even seem aware of their existence. Despite this, Eliza is grateful to the player for taking on the requests they provide to them, and has a friendly relationship with them. 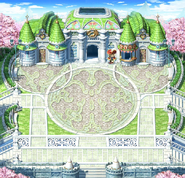