A golem craftworker. Once she starts creating one, she gets so into it that she forgets to go to sleep. Also works at the blacksmith.

Elena is generally lazy or lacks motivation when it comes to most tasks. On events she'll say she would rather be in bed or at home. She sleeps the latest out of all the town members. Elena is not lazy when it comes to her passion of golem creation, maintenance, and research. She takes pride in her work on making golems, and even has a golem run her Blacksmith. She is often irritated over small details, or people doubting her abilities. She is often cocky about how well she works on golems, and will not hesitate to go into detail about them. Her height is a sensitive subject, and is wise not to mention it around her.

She also sees the player as a rival, as many of her attempts to build golems are to compensate for not having their golem for herself. While leveling the Friend/Love meter, she builds different Golems who can beat the player, many of which have an issue of some sort and are easily defeated mid-cutscene. She eventually builds a masterpiece called Mr. Invincible, that is immensely powerful and whom you do not get the opportunity to fight.

She will ask to take apart (or dissect) the player's golem, throughout the entire game.

Elena has light skin and short blonde hair with light blue eyes. She wears a red, white and black outfit. Her bathing suit is a yellow and brown two piece. She resembles her brother James in terms of physical appearance.

Elena is a self-teaching artisan at the blacksmith. The player can't see her until after meeting Ymir (your golem). She will be interested in Ymir, and will be the one who maintains it. She's a bit sarcastic.

There are no Requests in Rune Factory: Tides of Destiny.

She is slightly irritated that her brother, James, is so protective over her, and that he gets her to participate in events. Around halfway of leveling her Friend/Love meter, she will open up more, and begin to retort angrily due to her being shy. 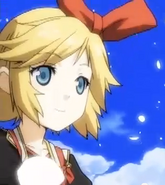 Elena in the opening of Tides of Destiny 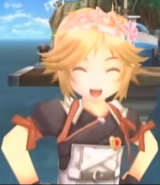 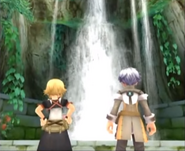 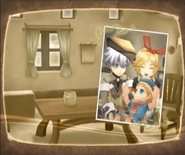