Intelligent, classy, sweet, caring, and good at housework. A faultless young lady who doesn't like to give up on anything.

Obsessed with cleaning. Electra has a sweet disposition, granted she worries about how to pay Maerwen. Unknown to her the real reason of her families poor status she devotes her time working, cleaning and becoming helpful in the studies of medicine and other areas to help rebuild the family to prevent losing what they have. She also enjoys making accessories as she practices she gets better with the help of Aden/Sonja and establishes a better friendship with her household.

Electra is innately practical, in spite of her flowing princess-like appearance. She prefers cheaper goods to more expensive ones, especially when the cheaper version is equally effective. This may stem from the fact she's financially poor, but also her conservative nature.

Electra is also very ambitious and future/goal oriented, as she desires to become governor herself someday. She is currently saving money to attend college on the mainland, and to take the political sciences needed to become a good governor when the day comes.

Electra wears a pink hoop dress holding cleaning tools over a white blouse, with long blue hair which appears to be tied up into dual buns, with blue eyes to match.

Electra De Sainte-Coquille is the daughter of Fenith Island's mayor, Beatrix. She loves cleaning, working, and crafting and works part-time at the general store, inn, and clinic. Maerwen often gets angered because of her doing the housework. Electra also takes care of most, if not all, of the mayoral duties. She plans on one day becoming the mayor of the island.

Electra says that there are big boulders to the north of the island that have been causing accidents. The boulders can be removed using Ymir. After Aden returns to her, she thanks him and gives 5000G.

She is arguably the least emotionally driven of all characters in the game, tending to rely on logic, fairness, and standards rather than passion when making decisions. This is exemplified many times on many occasions, such as when she complains how she needs to repay all she is indebted to (like Maerwen's willingness to work without pay and Aden's deeds), how she refuses expensive birthday gifts (as norms would dictate she'd have to return the favor), and even in her closest relationship (Maerwen seems much more attached to Electra than the other way around).

During her talks with her mother concerning her college, she does become mad when Beatrix becomes upset to learn her plans; one of the few circumstances she shows blatant emotion. She even becomes sad to the point she runs away, albeit she quickly calms her emotions and returns to discussion with her mother. This can be seen that she's passionate about reaching her goals and tries to keep everyone's interests in mind when executing her plans, especially her mother and her debt. She ultimately chooses to stay with her mother, since she needs to take care of her mother and her mother can give general advice about being Mayor.

It should be noted that when discussing the future Electra makes no mention of Maerwen, even though Maerwen tends to base her actions around Electra.

Thank you very much. How thoughtful of you.

Goodness... Is this trash? Why, thank you. I'll go throw this out.

Electra can be found sitting at the dining table with Maerwen eating breakfast early in the morning. She works part time at the Gemini Store on Monday and Thursday afternoons unless it is raining. She also works part time at the Inn on Tuesdays and at the Clinic on Wednesdays. Assuming Electra is not working, she can often be found in the Sainte-Coquille dining room around 8-9 PM, alongside Maerwen and Beatrix.

Electra in the opening of Tides of Destiny 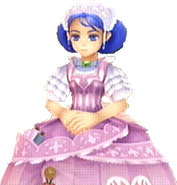 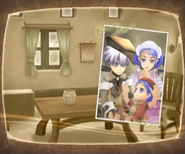