Transformed from a horse monster and now works as a server at Porcoline's restaurant. Quiet and often misunderstood. Doesn't seem to get along well with Doug.

Dylas has a monster form called Thunderbolt (ライデン "Raiden") that Lest and Frey must defeat in order to date him. He is also the first bachelor in the game to have a monster form with the other being Leon. After Lest/Frey defeats him, he will move in with Porcoline and Arthur, and can often be found fishing.

Dylas is a very awkward person, leading to him often sounding curt. Despite his generally serious demeanor, he is actually a kind and gentle person, with a bit of a short temper. On first impression, he is rather cold and dismissive. It will take some time before he warms up to the player or anyone else.

Dylas shares traits with his monster form. Specifically, he has a horse tail and his hair is shaped like a mane.

After defeating Ambrosia, the villagers will begin hearing creepy voices in the night coming from the Water Ruins. The protagonist must defeat Thunderbolt and he will transform into Dylas.

The protagonist brings him to the clinic and lets him rest for a day. Once the protagonist goes to visit him, Nancy finds that he's gone. As the protagonist enters the plaza, he or she sees a shimmering light from the castle where Dylas can then be found, collapsed in front of Ventuswill. He is taken back to rest at the clinic.

The next day, Dylas awakens. He claims to have amnesia as well and quickly leaves the clinic. He is stopped by Porcoline who invites him to live and work at the restaurant.

As Frey walks outside the castle, a man begins flirting with her. Though she denies his advances, he becomes pushy. Dylas witnesses this and tries to protect her. He threatens Rob, causing him to leave.

Humorously, this event can also occur if the player is using Lest.

The title of the Main Sub-Event is called 'For Clumsy You'. It starts with Dylas asking to see Frey's hand for a moment before running off. When Frey runs after him and asks him why he wanted to see her hand, he dismisses her completely and tells her to leave him alone. Continuing to follow him, she runs into the Blacksmith's, where Dylas can be seen near the forge. When asking him once again why he wanted to see her hand, he once again tells her to leave him alone. Talking to Bado, he tells Frey that lately Dylas had been using his forge a lot, and how he should have been charging him if he had known he would use it so much.

The next day, Dylas is once again at the Blacksmith's forge. Frey goes to talk to him, but he dismisses her, telling her that she should just go away and that he's not doing anything. This repeats for two more days until Frey asks him why he's being so mean to her. Dylas, being Dylas, yells at her that he just wanted to be left alone and that she shouldn't bother him. This leads to a fight between the two of them, leaving Dylas shocked at what he's said and Frey upset that they're having a fight and that he didn't want to spend time with her.

When Frey talks to the other villagers, they all remark on how upset she looks. Explaining the situation, they all become incredibly angry at Dylas, as it was obviously his fault for being stupid and making Frey upset. The day after, Dylas comes up to Frey and apologizes about what happened, and that if she forgave him, he would be waiting outside of the castle. No matter how long it takes, he would wait.

Talking to Dylas outside of the castle, he once again tells her that he's sorry, and that he had something he wanted to show her to make up for it. However, it is a secret and he asks Frey to close her eyes and let him guide her. Doing so, they set off to an unknown location, with Dylas holding Frey's hand and guiding her. They run into Doug and Porcoline as they walk through town, and Dylas will start getting annoyed that everyone is looking at them. Eventually, he stops and tells Frey to open her eyes, revealing that they are in the restaurant and Dylas had cooked a spread for her. He apologizes once again that he's hurt her, and tells her that the reason he had been so cold was because he didn't want the secret that he was cooking for her to get out. Dylas asks if she wants to try some, and upon saying yes, the two sit down to eat. Dylas offers her food to eat, but a pain in his hand stops him from offering her food. She states that he's hurt, and he says that it was his whole fault. Somehow, the town had found out that he had hurt Frey, and everyone came after him. However, he got his injury from tripping as he was running away, and it was his own fault anyway.

After eating, Dylas says he's going to get dessert, although Frey states that they already had dessert. After returning from the kitchen, Dylas goes into a speech about how he likes the town, and how he figured out why he likes the town. That it was her who changed him, and how he liked everyone, but he loved her. He pulls out a ring. It was the real reason why he had hurt her, because he didn't want her to see what he was working on. Imperfect, but made with his own hands. He asks Frey to marry him.

Upon saying yes, Doug suddenly appears out of nowhere to hug Dylas, much to his and Frey's shock. Illuminata follows soon after, saying that if he had just waited, they might have seen them kiss. Dylas asks how long they had been there, which Illuminata tells him that they've been there even before Dylas and Frey got there. Doug congratulates Dylas again. Porcoline can be heard saying that when they have a daughter, to let him help raise her. It shows that he was hiding behind the counter. This leads to nearly everyone else in town coming from various places in the restaurant, quoting Dylas' proposal, much to his anger and embarrassment. He then grabs Frey and runs through the doors to get away!

They stop at Dragon Lake, panting, asking if they had been followed. With a short laugh, Dylas saying he doesn't care anymore, and Frey joins him. He then tells her that he wanted to tell her about when he became a Guardian. About how the King ordered him to be locked up, though the shed was flimsy and the key was in the door, making it almost too easy to escape--so he didn't. The townspeople, however, tried to make it so he didn't have to sacrifice himself. But the day came, and even the King himself apologized to him. He says that, maybe, if he had gotten to know the townspeople, he would have resisted and lived along with them. But he says he's scared, now, that if such a time arises that he might have to sacrifice himself for her, that he wouldn't be able to do it, because he would want to live. Frey, who had been listening closely, tells him that it's okay--and that she was afraid that he would go on without her. They both promise to spend their lives together, no matter what happens.

Dylas also seems to have a friendly rivalry with Doug, both of them getting on each other's nerves. They are constantly arguing with each other. Their relationship is somewhat similar to Dolce and Pico's. You have to battle him in the Water Ruins, as Thunderbolt, in order to unlock him.

Hurry up and disappear. Or else...

Do you have some business with me? 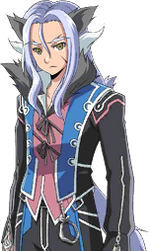 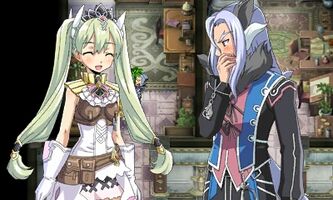 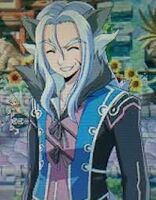 Dylas trying to hard to smile 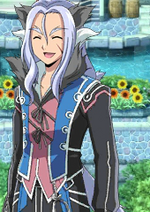 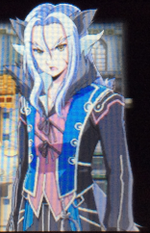 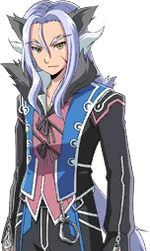 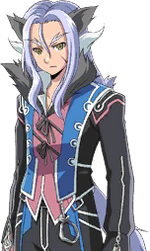 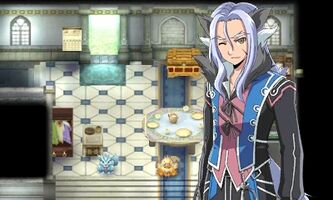 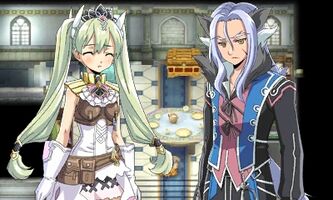 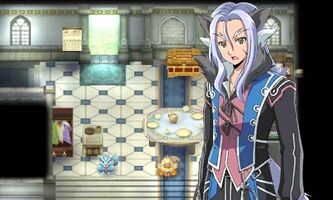 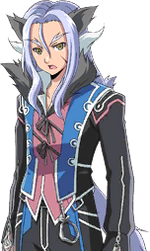 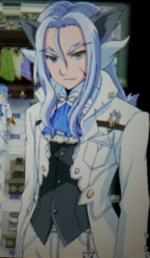 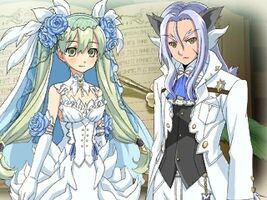 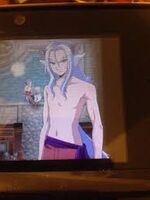 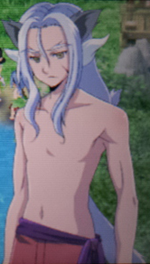 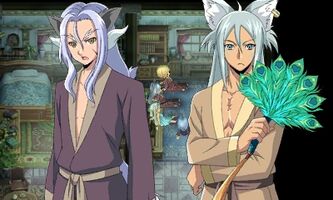 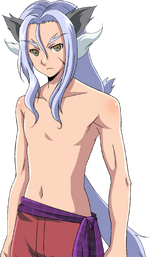