Douglas (ダガラス, Douglas) is a character in Rune Factory 2: A Fantasy Harvest Moon.

Douglas is the extremely over-protective father of Mana. Ever since she was six years old, he has been determined that no one will marry her as long as there was still air in his lungs. He claims this is out of concern for Mana's well-being, even though she protests and asks for more independence.

Douglas has a toxic idea of masculinity, mocking Kyle for ordering a Salad during Julia's request and calling him "Miss Kyle." He also has an antagonistic friendship with Kyle, competing over who is more "manly," which, to them, seems to mean physical strength.

Douglas has greying blond hair and a large moustache. He wears a shirt that, ironically, resembles a corset with off-the-shoulder sleeves. His forearms are wrapped to protect them from injury while he works, and he has a decorative band around his left bicep.

Douglas is Mana's single father. He also has a friendly rivalry with Gordon and when the two converse, they often compare bravery and strength. On festivals, he and Gordon meet at Natalie's house for drinks.

Douglas is one of the first people Kyle meets in Alvarna, and their first interaction is Douglas bellowing that Kyle better not get any ideas about marrying his daughter. After that, he agrees to let Kyle live on the farm, which is technically his property. He hopes Kyle will repay his goodwill by spending a lot at Pumpkin General Store.

Over time, Kyle can win Douglas' respect by being a good friend to Mana and proving his prowess in monster-slaying.

In the second generation, Douglas is a busy man! He continues to run the General Store, collecting shipping goods from the Farm at 3:00 PM each day. Before that, he tends the counter. He also finds time to bring Aaron and Aria's lunch every day. To get it, go to the workshop between 12:00 PM and 2:00 PM. He provides a randomly-selected Cooking item each day.

Douglas has moderately difficult tastes in gifts. Skipjack can only be fished up in the Fall from Alvarna - Pond, but before then you can plant Pumpkins in Blessia Island. However, Pumpkins are a crop that takes longer to grow, and they do not produce multiple yields.

Douglas opens Pumpkin General Store at 9:00 AM every day. In the first generation, he stays there until 6:00 PM, when he locks the door. In the second generation, he closes at 2:30 PM so he can go collect shipping goods from the farm.

On Festivals, he can be found in Alvarna - Clinic 1F having drinks with Natalie and Gordon. On non-holiday weekends, he hangs out with Gordon in the church. 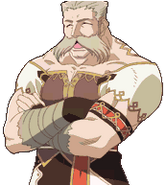 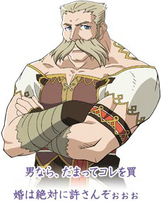 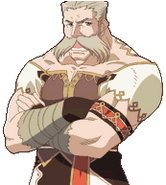 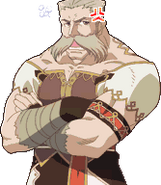 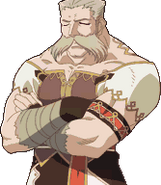