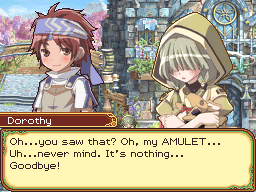 Find Dorothy in front of the inn and ask about her request.  She will try to tell you, but become too nervous and run off only mentioning her amulet.  Kyle is left wondering what she happened but gathers that she must have lost it.  Rosalind walks by and notices Kyle standing there.  He tells her about Dorothy's missing amulet, and she suggests looking around the docks.  Kyle thanks her and heads off.

Find the amulet at the docks and give it to Dorothy (she can be found at Cherry Blossom Square).  Dorothy will thank you and reward you with 100G.

Speak to Dorothy and inquire about her missing brooch. She will at first try to wave you off, but you manage to get the full truth out of Dorothy.  She says that she dropped it in Trieste Forest.  The brooch can be found on the ground at Trieste Forest - Spring Clearing (where the Orc Archers are).  Pick it up and return it to Dorothy for your reward.

Dorothy claims that her doll, Fern, has a fever. She wants a Wooly Furball to help repair Fern's stuffing. Kyle theorizes that the fever could be caused by friction in the cotton moving around, but this idea distresses Dorothy so he tells her to disregard it.

If Kyle already has a Wooly Furball in his inventory, he can give it to her right away. Otherwise, he has to fight Woolies in Trieste Forest - Spring Clearing (they appear after 6:00 PM) until one drops a Wooly Furball. As this can preclude you from doing other quests that day, it's adviseable to get the furball before accepting this request, or take on this request near 6:00 PM.

I Want to Ask You Something...

"There's, um, something I want to talk to you about..."
―Dorothy

Dorothy claims that her doll, Fern, has a question for Kyle. Speaking through the doll, she asks about the driving principle that guides Kyle's choices. Kyle wonders if she is testing his values. He can choose between two responses.

Can You Do Me a Favor?

"Could you maybe come over here for a little while?"
―Dorothy

Dorothy tries to ask Kyle to go for a walk with her, but stammers too much to be understood. She asks through Fern instead, and arranges for Kyle to meet her in front of the Church the next day. There, she speaks through Fern again. The doll tells Kyle that Dorothy has trouble expressing herself, but wants to get better at talking to people. This is because she wants to become a nurse, and communication skills are vital to nursing. She asks if Kyle will help Dorothy open up her heart to others.

After this, Dorothy tries to talk to Kyle without fern, but only apologizes for taking up his time. Kyle realizes that to help Dorothy talk with others, she needs to learn to speak without using Fern. He resolves to help Dorothy speak for herself.

Something about the Future...

"I want to be a nurse, but, well, I don't really have any self-confidence and..."
―Dorothy

Dorothy calls Kyle over for help preparing for the nursing exam. The exam includes an interview, which will be difficult given Dorthy's communication problems. She asks Kyle to give her a practice interview, and tries to speak through Fern, but Kyle encourages her to try talking without the doll.

Kyle can choose between different questions, some of which are easy and will help Dorothy build confidence, and some of which are difficult or which remind herself of the parts of herself that she doesn't like. If Kyle chooses three or more of the latter questions, Dorothy says her confidence has been totally destroyed. If he takes it easy on her though, she says she has found some confidence and is grateful for his help.

"Cammy's been going out a lot lately and I'm not really sure where. If you could do me a small favor..."
―Dorothy

Dorothy is concerned that Cammy is going into the forest, which is dangerous because of the monsters who live there. She says that Cammy doesn't really listen to her, so even though she's the older sister, she needs some help. She asks Kyle to confront Cammy and get her to stop going to dangerous places.

Cammy admits she's been going into Trieste Forest to have adventures. She says it's fine because she can just run away from monsters, but Kyle reminds her that a monster could ambush her, or she could become injured while running. She tries to compromise by saying she'll just get Kyle to go with her next time, but eventually she reluctantly agrees not to go at all. Upon returning to Dorothy, the older sister expresses relief and says there's a lot she can learn from Kyle. She thanks him and gives him a Glazed Yam as a reward.

"I tried making some cookies, so if you want, come over and try them for me? I'll be waiting..."
―Dorothy

Dorothy has decided to get better at cooking, and after at least eight failed batches, has some chocolate cookies that she thinks might be fit for Kyle's consumption. The dialogue choices in this request are interesting, as you get to decide whether the cookies are actually good or not, rather than only what Kyle says about them.

"Fern has been acting kind of funny lately. Come over and help please? For me?"
―Dorothy

Dorothy is worried because Fern hasn't been talking to her lately. She is worried that she's done something wrong. Kyle reflects that Dorothy has been using the doll to communicate, and that this might mean her skills have grown to the point where she doesn't need it any more. He tells her this is probably because she's grown closer to her other friends, and tells her that Fern is happy to have helped her so far and will still be by her side, watching over her. Dorothy is happy to hear this. She says Fern will always be important to her, but that she's happy to have gained some confidence, and thanks Kyle for his help.

"There's, erm, something I want to talk to you about..."
―Dorothy

Dorothy musters her nerve to ask Kyle for a date. This makes her nervous, and she says her heart is beating so fast that she feels faint. She asks him to meet her at the docks the next day.

When she gets there, Kyle comments that she's early, and she says she couldn't wait. She suggests they talk and watch the ocean. They then exchange questions. Based on his choices, Dorothy either comments that Kyle is a nice person as she suspected, that he isn't as shallow as he thought, or that he's "a pretty unusual person." Regardless, she says she finds him more attractive now, but only if Kyle chooses the options provided in the Quick Guide does she give him a reward and say she wants to see him again.

I've got something for you (Gordon)

"I've got something I want to give you. Come get it."
―Gordon

Gordon calls Kyle to talk to him about Dorothy. He says Kyle has probably already noticed, but that Dorothy has a shadow over her heart and doesn't open it up to others. He says he's tried to be her strength, but he's never been able to help her open her heart. He noticed that Kyle seems to have succeeded where he could not, and says he'd be proud to call Kyle his son, granting his full blessing if Kyle marries Dorothy.

Gordon says Kyle doesn't have to marry her if he doesn't want to, but that regardless, he wants him to have the Blessing Pendant. Gordon says he has crafted this pendant to protect Dorothy from disaster. He reveals that all the items he's had Kyle fetch for him have been for this, that he hoped its protection would help her feel safe to open up to others. Now he wants Kyle to have it, as it will mean more coming from him.

A Delivery for Julia

Can You Get Some Medicinal Herbs?