Runs a grocery store. There seems to be a deep reason why he came to this town.

Although he initially seems lazy and uncaring, Danny has a nicer side to him. He comes from a large family, and even living far away does his best to help support them, sending money whenever he can.

He seems to be the male equivalent of Rosetta, except his hair and eyes are darker.

Danny is a shop owner who has learned that with no competition in town he can cut a few corners in his shop. Things like customer service and variety don't exist in his store, and it ultimately leads to his ruin when Rosetta moves to town and opens a nicer business right next door to him. He also is very straight-forward and blunt.

Because he is a normal villager, it seems like there are no Events with Danny.

Danny has a big infatuation with Anette, but as with Erik (who has similar feelings for Lara), she doesn't seem to think of him as anything special. He also has a bit of a mean streak, and will try to trick you into giving Erik things that frighten him.

Being beaten out of business by Rosetta (and then having to turn to her for work) really whips Danny into shape. While working in the store he will pay much more attention to customers, and will take over picking up shipments when Rosetta is out of town.

What is this? Don't give it to me! 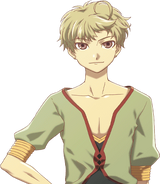 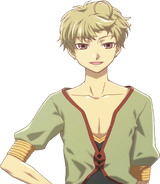