To grow crops in Rune Factory 4, you'll need to buy seeds from Sincerity General Store or Carnation's. These stores have a small initial stock that expands as you complete requests. After completing a certain request, the stores will stock higher level crops and seeds as you ship them.

There are no season restrictions for when you grow a crop, but there are better or worse times of the year to plant certain things.

After planting a seed, you can check its progress with a magnifying glass. The second line will list the percentage growth of the crop. Hidden behind that growth % is the number of days the crop has grown. For example, an apple tree with '[Grw.] 63% means' it is 39.0 days into its 62 day growth time. Every morning at 6AM, the hidden days counter is increased by a specified amount. When that value reaches the required growth time of the crop, the crop will become harvestable.

The amount increased is a combination of 2 factors: the '[Grw.] #.#x' (where #.# is a decimal number between 0.1 and 5.0) value of the 2x2 plot of soil the crop is on and whether the season is good, bad or neutral for the crop. The soil growth value can be seen with a magnifying lens. It will be the second listed [Grw.] statistic, the one with an x instead of a % at the end. This value can be increased by Formulas. Formula A will increase the soil's growth value by 0.5. Formula B by 1.0 and Formula C by 2.0. The level of the formula has no effect on the value increased. If the crop is favored for the season, this value is then multiplied by 1.5. If the crop is disfavored for the season, the value is multiplied by 2/3. This final result will be the value added to the hidden days value at 6 AM every morning. Note if the crop wasn't watered, no increase will happen.

Thus, the fastest way to grow a crop is to cap the soil's growth value at 5.0 and grow it during its favored season. The crop will gain 7.5 days towards their growth time every morning.

Runey weather will further multiply the increment value by 4, so that the above would gain 30.0 days at 6AM.

New crops begin at level 1 and can be raised to level 10. Higher level crops sell at higher prices, make higher level food and medicine, and have stronger effects when fed to monsters. After completing the Request "Ship a level 2 Turnip!", stores will stock the highest level crop/seed that you have shipped. You can ship either the crop or the seed and the appropriate store will then carry both the crop and the seeds of that level.

Store crop and seed levels only rise if you ship crops that you yourself have raised.

To raise crop levels you'll want to obtain and plant higher level seeds. To do this, use a sickle on a fully grown (100% [Grw.]) crop. You should get a seed that is 1 level higher than the crop was. You can plant this seed or ship it; if you ship it before 8:00 AM, then you will be able to buy another of the same level on the same day.

Note that low-level crops often leave behind higher level seeds when harvested. If you plant half a a field of level 1 turnips, you will likely get many level 2 turnip seeds after harvesting them. Additionally, as your soil quality improves (a natural process that occurs as you harvest crops), your regularly watered crops will sometimes grow to be be a higher level than the seed you planted. This will allow you to skip several levels at once, especially for long-growing crops. Soil quality can be improved by using Greenifier and Greenifier+ on it.

The basic steps of growing giant produce are simple. First, plant 4 of the same crop onto a marked 2x2 plot of land. Then, sprinkle Giantizer on these crops. Water the crops every day until they are fully grown, and then after an extra day or two they will merge into a single gigantic crop.

Note: In Rune Factory 4, Giantizer affects the soil, not the crop. Specifically, it affects the stat [Sz.]+, which can be examined using the Magnifying Glass. Another stat, [Sz.], raises naturally as you grow certain crops. It is best to grow giant crops on land that has high [Sz.] and [Sz.]+ stats.

Crops planted out-of-season are harder to giantize than crops planted in-season. Plants have an easier time giantizing on high quality soil; you can give soil a quality boost (up to +2.00%) with Greenifier. Maximum soil quality raises permanently as you harvest crops. It may also help to restore the HP of your soil and/or plant with Withered Grass, Corn, or Clover.

The General Store stocks seeds for all crops except flowers. It also sells groceries and a rotating selection of wild crops. Blossom and Doug work here, with Doug working on Tuesdays and Thursdays. For information on how to find seeds and/or unlock them in the store, view the Requests (RF4) page. 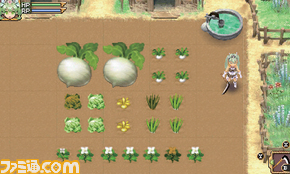 ++The tree will not regrow if chopped down. However, once fully grown, Grapes, Orange, and Apple trees produce fruit daily.

+++The Twinkle Tree (grown from a Shining Seed) produces no fruit, but can be chopped with an axe for Lumber and Glitter Augite. Similarly, Dungeon Flowers can be hit with a hammer for Material Stone. You can do this as long as the Twinkle Tree/Dungeon Flower have HP. HP can be restored by hoeing Withered Grass, Corn, or Clover onto the plot of land where the Tree or Flower is planted.

Trees and Dungeons can be made giant. Giant trees do not produce giant fruit. Giant dungeons have extra floors.

Carnation's stocks seeds for flowers. It also sells nutrients and a rotating selection of flowers and wild crops. Carnation's is run by Illuminata; after she takes Amber in, they alternate workdays, with Amber taking Tuesdays and Thursdays.

For information on how to find seeds and/or unlock them in the store, view the Requests (RF4) page.

This list includes all wild plants which appear on your shipping record under "Crops". These cannot be cultivated from seeds but can be collected in other ways, such as from the wild or from fallow fields.

Most wild crops will, once shipped, appear for sale at one or more of the town vendors (Sincerity General Store, Carnation's, Tiny Bandage Clinic). No matter what level wild crop you ship, shops will always sell level 1 wild crops. There are 3 crops you can never buy: Monarch Mushroom, Mealy Apple, and Ayngondaia Lawn.

Refer to the World Map for help locating items. The below locations are not always all-inclusive, but rather list the best location for finding a large number of a specific item. Note that most grasses can also be collected from Revival Cave and Maya Road.

As noted above, Mushrooms can be found growing at Selphia Plains D1-4, Selphia Plains E1-3 and Autumn Road F3; they also drop from Big Muck, Tricky Muck. The Monarch Mushroom is also a very rare drop from Death Fungus.

Both Mushrooms and the Monarch Mushroom can be found as hidden items. The easiest way to find hidden items is to bring a monster or villager out adventuring with you and look for the treasure chest filled though bubble to appear above their head. This indicates that there is a hidden treasure somewhere near where the monster/person is standing. Look around until you get a red arrow and click A to receive your treasure!

The Mushrooms have the following effects, when sorted using the X button: